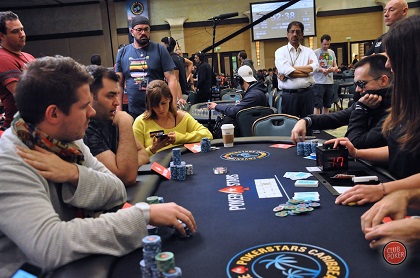 Pop goes the bubble in the Bahamas. The 2019 PCA kicked off with the PokerStars Players Championship, which was a huge success. PokerStars set a record for biggest $25K field in the history of poker on Earth (I'm sure there's a sick game on one of Alpha Centuri's moons, but I can't confirm it other than catching a glimpse of the intergalactic casino during a DMT blast) with 1,039 total entrants. That final tally included 320 Platinum Pass winners. In this rare completely single-entry freezeout affair, they passed the 1K barrier.

A total of 215 players began Day 3 and only 38 players made the cut at the end of the night. Along the way, the money bubble burst, and 34 unlucky souls got stiff-armed on Paradise Island. Only the top 181 places paid out. I mean, there's a lot worse places you can bubble a tournament... so at least they can drink the tilt away with a fruity cocktail, or bury their toes in the sand and work on their tan while replaying the bad beat over and over in the heads.

This year's event attracted 1,039 players for a prize pool worth $26 million. The suits added $1M to first place, so the champ will walk away with $5.1 million. Not too shabby for a $25K buy-in, eh? Everyone at the final table of six will win at least $1M.

At the end of Day 3 of the PSPC, Scott Baumstein from New Jersey bagged up the lead with 4.7M. The UK's Yiannis Liperis finished the night second overall with 4.2M. French pro Julien Martini was third with 3.2M.

Nine lucky Platinum Pass winners are still left in the hunt including Jackie Burkhart, Michael Robionek, Marc Rivera, Adrian Samu, Atanas Pavlov, Pedro Padilha, Ramon Collins, Joao Barbosa, and Mikita Badziakouski. Of course, Badzman could have bought in directly with the change in his pockets, but he certainly earned his Platinum Pass.

Follow along for Day 4 action of the PSPC as they play down to a final table of six. Check out PokerStars Blog for award-winning coverage. The badass venustyle is on the ground in the Bahamas and working the trenches as we speak. Visit the OG Club Poker site for French coverage. Or watch the live stream featuring Stapes, Mario Ho, and James Hartigan... you, know that other guy who looks like John Oliver.