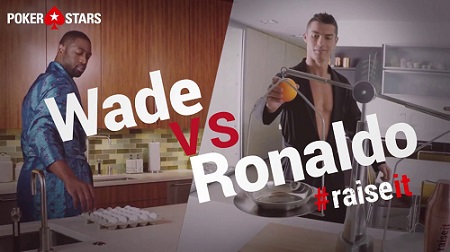 Raise it! Dwyane Wade and Ronaldo are at it again. The two superstars have been trying to outduel each other via social media with #raiseit vids. This isn't an old-school Hamilton/Burr duel on the banks of the Hudson River. Instead, the two world-class athletes have been challenging each other by posting short videos of their awesomeness.

The newest video campaign that PokerStars launched last November featured two of the most popular athletes on the planet with Portugal's star footballer Ronaldo and NBA champion Dwyane Wade. The two play different sports, but they managed to tie their own sports into their video challenges.

During Christmas, they had a holiday themed #raiseit challenge. And now, they are dueling in various fitness campaigns. Check out the latest videos from Wade and Ronaldo…