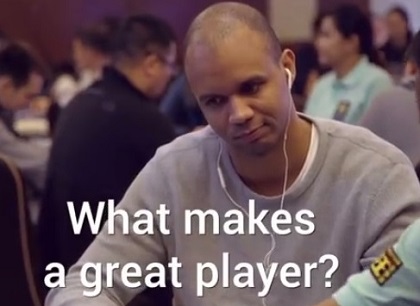 It's not quite Moby Dick, but any bit of social media featuring Phil Ivey is like a white whale sighting. Credit Paul Phua for this one. He recently launched his new training site and asked his buddy Phil Ivey to sit down for an interview. If you follow poker media closely, you know that Ivey rarely did any press and loathed doing interviews...even when he was a sponsored pro. In the wake of the Full Tilt Poker scandal, Ivey became a ghost. You'd hear stories about him playing in certain high-stakes games around Vegas or overseas in Macau. But like the elusive white whale, no one could actually pin down Ivey for an actual interview. Unless, your Paul Phua... of course!

The Malaysian-born Phua is the world's biggest bookie, but he also debunked those claims stating, "Don't believe everything you read in the media." It's common knowledge in gambling circles that Phua owned IBCBet, one of the largest online sportsbooks in the world.

Phua's villa in Las Vegas was raided in the summer of 2014 by the FBI, who claimed he was the mastermind behind an illegal betting "wire room" that took in wagers during the World Cup. He pleaded not guilty on all charges.

The renown bookie had taken an affinity with poker. Phua, and other Chinese businessmen with deep pockets, were welcomed at the biggest cash games in Macau and elsewhere in Asia. Phua went from being the whale to shark in a very short time. Playing against the top pros in the world will do that to you.

In this video for Paul Phua Poker School, Ivey offered up advice for beginners and pros. One of his tips... figure out a way to win when you have much better players at the table. Instead of getting intimidate, figure out a strategy that works. Ivey also remined everyone that poker is a tough game with lots of swings and losing streaks. If you can't handle the losing, then you need to find a new hobby/profession. Ivey also stressed the importance of playing well during shitty sessions.

Watch the video below...

It only took 16 months and a world-wide pandemic, but the 2020 WPT Borgata Winter Poker Open finally has a champion. The $3,200 buy-in event started in January 2020 with 1,290 runners. They played down to a final table with Veerab Zakarian bagging the lead. They thought they were going to wait a couple of months and play the final table out in Las Vegas but the pandemic hit and delayed the final table until May 2021. WPT Player of the Year Brian Altman finished in third place and missed out on winning a third WPT title. Zakarian edged out James Anderson to win the title and $674,840.

Get ready for the brand-spanking new PokerGo Tour launched by PokerGo, which was created to establish a bona fide professional ranking system. This new PokerGO Tour will include 150 international events, including PokerGo's branded events -- US Poker Open, Poker Masters, and Super High Roller Bowl -- in which poker pros compete for the Poker Go Tour Player of the Year and an additional $100,000 in cash.