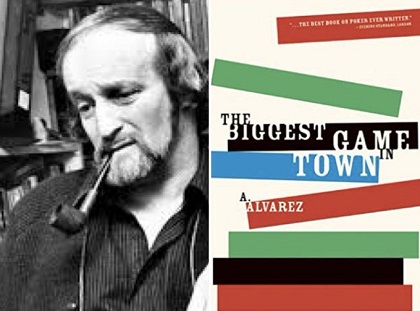 If it weren't for Al Alvarez, I probably would not be writing here or penning his obituary. I often credit two men for the advancement of my career. One of them is Chris Moneymaker and the other is Al Alvarez. Moneymaker helped ignited the poker boom with his victory at the 2003 World Series of Poker. However, it's what happened at the 1981 World Series of Poker that really launched my career.

If Al Alvarez did not make a heroic journey from London to Las Vegas to soak up the 1981 WSOP and then write about it in his book "The Biggest Game in Town", then I would never have had a shot at a job in the poker media.

Alvarez took a low-brow vice and gave it a true literary treatment, so that folks from all walks of life could take a ride through downtown Las Vegas through Alvarez's lush verbiage.

You can make a strong argument that no one in the mainstream square world would even read a word about the WSOP if Al Alvarez didn't take that initial leap of faith into the gambling realm.

Alvarez in turn inspired a new generation of American poker writers including Andy Glazer and Jesse May. I would not be here today without the Glazer and May blazing the trail in America. But that initial trail from the literary world to the Horseshoe was carved out by British poet Al Alvarez. Alvarez painted word pictures of downtown Las Vegas that have become a part of everyday vernacular in both Vegas and the gambling world.

It's funny but I knew Al Alvarez as a poet way before I knew about him as the Brit who wrote that gnarly poker book about cowboys and degenerates. That was a time when I probably spent more time trying to impress the NYC literati before I got super-hooked on Texas Hold'em.

Alvarez ran in the same circles as Ted Hughes and Sylvia Plath. He knew them both very well. The actor Jared Harris (Mad Men, Chernobyl) portrayed Al Alvarez in the film version of Sylvia Plath's life title "Sylvia". Gwenyth Paltrow played Sylvia Plath in a film that tried to shed some light on the complicated marriage between Plath and Ted Hughes during an era when Plath tried to break down the gender barrier in the insular poetry world.

Too bad we never got Jared Harris to play Alvarez in a 1980s period piece about the murky poker world in the shadows of dingy downtown Las Vegas. That's a poker movie I'd love to see. Heck, it's a Vegas movie I'm dying to see.

The Guardian's obituary mentioned that Al Alvarez wrote books in the 1980s about risk taking. That includes "The Biggest Game in Town" (1983) along with his divorce book (1982) and "Feeding the Rat" (1989), which chronicled his obsession to rock climbing.

The poet shifted his focus to novels and then nonfiction. Alvarez never stopped writing and he never stopped creating. He never pigeonholed himself in one form or genre. He kept moving and kept writing. He's problem erased more gems than I've ever published.

Alvarez never quite got all the accolades among the English literati that should have because he was not a kissass and loathed the "monsters" in the literary world. You can't blame him. I would have done the same and went a different route. Unfortunately, poets and writers with far inferior skills were showered with juicy advances, feted by the literary gatekeepers, and gobbled up the meaningless awards. Maybe some day, he'll finally get his due.

I've done a lot of climbing, played a lot of poker. There's an awful lot of laughing that goes on by the pond. I think anything is good for you that makes you laugh.

The poker world seems like this behemoth of a billion dollar industry, but it's really small all things considered. That's why when a genuine trailblazer like Al Alvarez dies, it hits home. Hard.

RIP Al Alvarez. Thanks for taking the initial leap of faith. Without your courage, I never would have made mine.