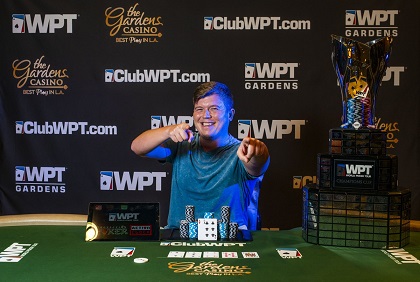 Lior Orel came into the WPT Gardens final table with the big stack with 3.25 million. Roger Teska was not far behind with 2.97 million and Hungary's Laszlo Molnar was right behind Teska with 2.855 million. The lone German at the final table, Lars Kamphues, held a 2.5 million stack. The two shorties were Cord Garcia with 1.88 million and Andrew Wisdom with 1.4 million.

It only took 17 hands to lose one of the short stacks. Cord Garcia became the first player to exit the final table. He got it all-in with Queen-ten against Lars Kamphues' pocket Queens. The Ladies held up and Kamphues won the pot. Garcia banked $73,600 for sixth place.

It only took a full orbit before the second player said goodbye. On Hand #23, Andy Wisdom bounced in fifth place when his

lost to Kamphues' pocket fours. The German flopped a full house and Wisdom walked into the ambush. Wisdom earned a payday worth $96,545.

Kamphues took out the first two players and he seized the lead as he soared to nearly 6 million in chips with four remaining. Kamphues could not hold onto the lead before the pack caught up.

After 114 hands of four-handed action, someone finally busted. Kamphues got it all in with pocket Jacks against Teska's Ace-Queen. The proverbial Ace on the river sunk Kamphues hopes of staving off elimination. He busted in fourth place, which paid out $128K.

With three to go, Teska took over the lead with 6.2 million.

A cooler on Hand #187 knocked out Orel. He got it all-in with

. Ouch. Molnar turned a King too to lock up a full house to win the hand. Orel bounced in third place which was worth $172,770.

With two remaining, Molnar held a 12.27M to 2.65M lead. Despite the deficit, Teska turned things around quickly and got lucky with Queen-Jack against Ace-Queen to double up. He'd become a champion in less than 42 hands of heads-up action. He chipped away and the quads helped.