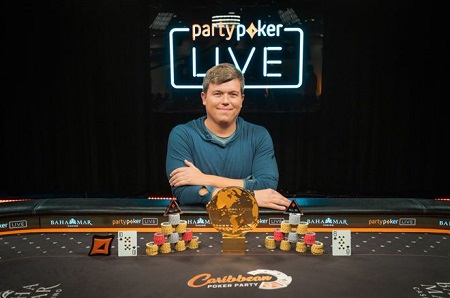 Sometimes things get a little weird in the Bahamas. Sometimes you ship a $25K for $2 million. Roger Teska binked the 2018 Caribbean Poker Party $25,500 MILLIONS World for $2 million and he's gonna party like it's 1999. You heard this story before: highstakes cash game guru rarely plays tournament, buys into tournament, and then wins tournament.

Teska is primarily a cash-game specialist but he bested one of the best finishers in the game with Steve O'Dwyer. But for a brief moment in time and space in the Bahamas, Teska outmangoed the mango master. O'Dwyer won a 25K last month.

If my math is right, this event barely missed the guarantee for a small overlay. The $25,500 MILLIONS World boasted a $10 million guarantee and at least $2 million to first place. Only the top 39 places paid out in this top heavy event where at least the top 3 places won at least seven figures.

Steve O'Dwyer was the big dog at the final table that had familiar faces such as Charles La Boissoniere, Paul Tedeschi, Ben Tollerene, Rainer Kempe, Niall Farrell and Joao Vieira. Teska felt he was outmatched in someways, but he held his own against some of the best tournament pros in the world.

It was not O'Dwyer's night. After a long slog, Teska was the last one standing in the $25K. O'Dwyer settled on a runner up's share worth $1.3 million. Not too shabby, eh?

Teska walked away with $2 million. Umbrella drinks on Rog!

The other day Giuseppe Iadisernia from Venezuela won the $50,000 Super High Roller for $845,000. His final table was a doozy that included Sorel Mizzi, Benjamin Pollak, Sean Winter, Ali Imsirovic, and Talal Shakerchi.