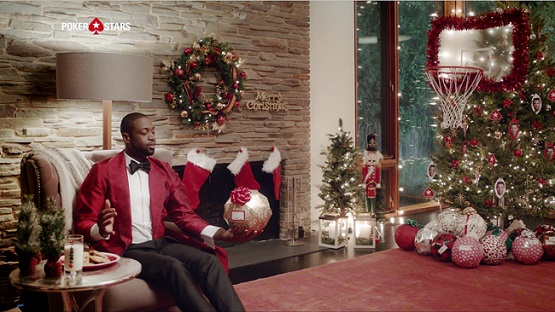 Ronaldo and D-Wade are back! The NBA star and one of the most popular soccer players (oh sorry… footballers) in the world have been featured in PokerStars #RaiseIt campaign. They both posted original videos on their social media feeds in which they did something clever and athletic regarding their prospective sports. Ronaldo would be doing tricks with a soccer ball and D-Wade would be using a basketball for various trick shots.

According to a P.R. blast from PokerStars HQ… Ronaldo and Wade impressed with their Christmas videos, which were posted on their social media channels on Friday and Saturday. The #raiseit campaign is a fun take on the poker mentality of raising the stakes in order to ‘one-up' your opponent. It showcases the competitive nature of poker and sport, and the focus, tenacity and endurance needed to succeed in both activities. The football sensation and Chicago Bulls basketball star have already battled it out twice in the ‘Superstar Wake Up' and ‘Meme Battle' rounds. So far, the videos have received more than 43 million views across social media channels.

In the latest videos, both D-Wade and Ronald got into the holiday spirit. Their latest #RaiseIt videos are Christmas-themed. D-Wade is seated in front of a Christmas tree and tossed gift-wrapped balls into a basket. Meanwhile, Ronaldo connects on goal over a wall of human-sized snowmen.