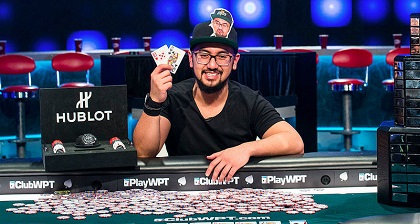 The Bellagio Casino in Las Vegas hosted the last World Poker Tour event on the 2017 calendar schedule. The Bellagio's annual Five Diamond World Poker Classic has always been a popular series for pros and amateurs alike. If anyone had a banner year at the tables, they'd try to keep the run good going at the Bellagio. And if anyone struggled over the year, they'd hit up the Bellagio hoping to end the year on a positive note.

The 2017 Five Diamond World Poker Classic Main Event also doubled as a stop on the World Poker Tour. This year's WPT Five Diamond broke a record with 812 entrants. Keep in mind, this event had a $10K price tag ($10,400 buy-in to be exact). The total prize pool topped $7.8 million with first place winning nearly $2M and second place also locking up a seven-figure payout.

Ryan Tosoc shipped the Five Diamond Main Event for a sick score worth $1,958,065. A large score like that is newsworthy all by itself. However, Tosco managed to made back-to-back final tables in the same event. But wait, there's more! In addition, Tosoc improved upon last year's finish. Quite a feat considered Tosoc was the runner-up last year. At the 2016 WPT Five Diamond World Poker Classic, Tosoc earned $1.1M for a runner-up score after he lost heads-up to James Romero.

Moments after his victory, Tosco told reporters, “It's unreal. Feels like a dream.”

Yes, your math is correct. Tosoc won over $3M in the last two Decembers at the Bellagio. To date, Tosoc won nearly $3.5M in tournaments, so it's safe to say Tosco loves the Bellagio.

The final table at this year's WPT Five Diamond Classic included Alex Foxen, Mike Del Vecchio, Sean Perry, Ajay Chabra, and Richard Kirsch. WPT Champions Club member Mike Del Vecchio finished in third place and missed a shot at another WPT title. Tosoc picked off Alex Foxen heads-up for the win. Foxen has been running good in 2017, which has been his most profitable year as a pro with over $1.6M in cashes including a victory down at the Seminole Hard Rock in Hollywood, Florida.