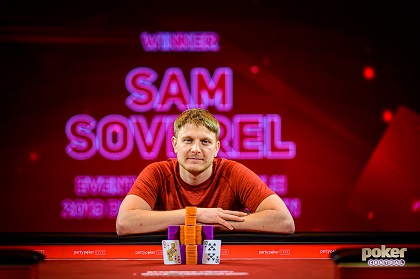 The price of poker went up for Event #5 with a £25,000 NL affair. Sam Soverel finally ended up in the winner's circle after fading 28 players including a difficult final four with Ali Imsirovic, Chidwick, and Rainer Kempe. SS banked £322K for first after a pair of runner-ups in the first four events.

In the second 25K, Sergei Reixbach banked £253K for outlasted a field of 22 runners in Event #6. Tim Adams finished in second and Elio Fox took third in that one.

It was time to gambool for Event #7 £25,500 PLO. Chidwick won his first BPO title and banked £203K. Sam Soverel finished in third.

The rush continued for Sam Soverel. He won the third and final 25K NL event. Soverel outlasted 13 players in a small field Event #8 in which only the top two places paid out. Steve O'Dwyer finished second, while Soverel padded his BPO lead. Through 8 events, Soverel won two and added two second-place finishes plus one third place.

Badzman binked Event #9 for one of the biggest scores at the BPO, which attracted 18 runners in the £50K NL affair. Bazdzman won £486K for first place. The final three included American David Peters and German pro Christoph Vogelsang.

In the final Event #10, Cary Katz finished in second place after losing a heads-up bout to Ben Tollerene. A total of 12 players took a shot at the BPO 100K title.