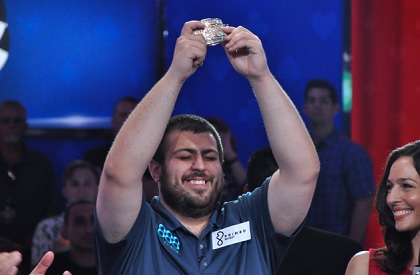 Ship it to Blumstein. Scott Blumstein from Morristown, New Jersey won the most-coveted prize in all of poker... the WSOP Main Event Championship. Blumstein walked away with his first bracelet and a mountain of cash worth $8.15M. Blumstein faded the third-largest field in WSOP Main Event history to win the 2017 WSOP Main Event. He will forever be immortalized for his feat.

Going into the third and final day of the Main Event final table, Blumstein held more than 63% of remaining chips in play. Pretty much everyone knew he was going to win...eventually. But you never know with poker. Crazy stuff happens all the time, plus there's the tilt factor that not even the best of the best can stave off. However, Blumstein knew the Main Event was his to lose...and he managed to maintain the lead on the final day en route to the victory.

The biggest hand of the night was a three-way all in between the two small stacks and big-stacked Blumstein. French pro Benjamin Pollak would bust on that hand, while Dan Ott doubled up. It would have be so sick if Blumstein knocked out both players on a single hand to win the Main Event. ESPN suits would have had a hard on for a decade if that happened! I mean, it's a long shot to ever happen...but that's why the money presentation occurs three-handed...because you never know when a three-way all-in could produce the next world champion!

. Dan Ott shoved from the small blind for 46M with

. Scott Blumstein woke up with

in the big blind. He mini-tanked for a second before he emphatically called. The entire crowd jumped to their feet. Across the planet, poker fans shouted that their collective screens. Could this be one of the greatest hands in the history of poker with a double elimination?

. Action flop! Ott improved to top pair. Pollak picked up an open-ended straight draw, while Blumstein flopped a Broadway gutter draw. The turn was the

spiked on the river. Neither card improved for Pollak or Blumstein. Ott won the pot and staved off elimination. Alas, Pollak busted out in third place. Remarkable run for the French pro, who took home $3.5M for his work.

Heads-up lasted only 65 hands. And Ott could not get anything going in that span.

On the final hand #246, both players got it all-in. Ott led with Ace-eight against Blumstein's Ace-deuce. Alas, the proverbial deuce on the river crushed Ott's dreams of doubling up. The river suckout gave Blumstein the win. That's poker brah and sisbrahs!