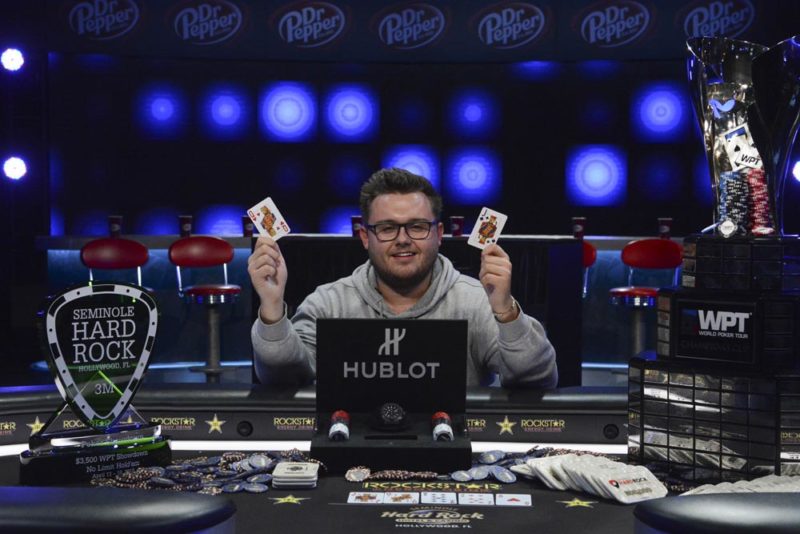 The Seminole Hard Rock Casino in Hollywood, Florida has become a major hub of poker in the southeast. The World Poker Tour made a stop just north of Miami for the annual SHR Poker Showdown. The $3,500 buy-in event attracted 1,309 players from all over Florida, the East Coast, and even a few stragglers from the left coast took a shot at WPT title.

The U.K.'s Scott Margereson stepped into the winner's circle after he outlasted a tough-as-balls final table. Margereson also picked off Faraz Jaka heads-up to secure the victory. Margereson is no slouch at the online tables with over $4.1 million in career earnings. His total live earning was less than $570K and his biggest live cash to date was a wee bit more than 100K. This score at the SHR marked Margereson's best live cash to date. He's now closing in on $5 million in combined live/virtual earnings.

Brian Hastings held the chip lead heading into the final table, however, he could not hold off the rabid chase pack. Hastings made as far as the final three, but that's as far as his run would go.

Jeff Fielder was the first person out at the final table. Matt Stout smoked most of the field until he ran out of gas and hit the road in fifth place. Joey Couden hit the bricks in fourth place.

Hastings busted in third place on Hand #150 with Ace-Jack. His top pair no good against Scott Margereson's flush draw. Ah, it was Margereson's night. Margereson improved to a flush and sent Hastings home in third place. Hastings took down $336K for a couple of days of work.

Scott Margereson held nearly a 4-1 chip lead when heads-up began. The final two duked it out for 82 hands. Jaka made it a heck of a contest, but he couldn't pull off the comeback.

The final hand was good ole Queen-Jack versus Ace-eight suited. Of coure, the Ace-mid lost. Margereson flopped top two, although Jaka flopped a gutshot draw. Jaka never got there and Margereson's two-pair held up.