In Showtime Hold'em, folded hole cards are exposed face-up for every at the table to view throughout the duration of the hand. Showtime Hold'em is played six-handed, so in a heads-up pot, there will be a maximum of 8 additional cards (from four opponents) to help determine a decision. 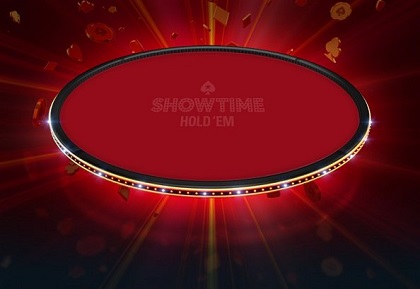 PokerStars describes Showtime as: "Traditional Texas Hold'em sees players each receive two private cards (known as ‘hole cards') that belong to them alone, with five community cards then dealt face-up – known as the ‘board'. All players in the hand use these shared community cards, combined with their own hole cards, to each make their best possible five-card poker hand. What makes Showtime Hold'em different, is that every card folded by any player remains face-up and visible for the rest of the hand. This includes all cards folded pre- and post-flop."

Showtime Hold'em's biggest appeal is that you do not have to learn a new game. It's a slightly tweaked version of no-limit hold'em, which was described in the movie Rounders as the “Cadillac of poker.” Well then Showtime Hold'em is like a Cadillac with see through doors!

The exposed cards format in Showtime Hold'em should create a new wave a strategy to incorporate the new-found intel.

Showtime Hold'em will encourage nitty players to play a little looser, because their super-tight ways will be on full display.

Showtime's format, in theory, should slow down hyper-aggressive players as well.

PokerStars will seat players at Showtime Hold'em tables using the Seat Me system, which was designed to eliminate "bum hunting" or "whale hunting." You select the stakes in the Showtime lobby and you're seated automatically at the next random open seat.

Showtime Hold'em is 6-max NL and the stakes start as low as 2 cents/5 cents for a $2 buy-in. There is plenty of micro-stakes action available for players with modest bankrolls, or other players curious to give it a spin without investing too much money.

PokerStars organizes special tournaments that are pretty interesting for us, the poker players community. Come back and check this page regularly to get the latest offers.

Every September, PokerStars hosts the World Championship of Online Poker (WCOOP), a massive series of tournaments with millions of dollars in guaranteed prize pools. Buy-ins for WCOOP come in three different tiers to make this series access to players of all bankroll sizes.
All the information on the WCOOP

Every May like clockwork, PokerStars hosts the Spring Championship of Online Poker (SCOOP). During SCOOP, PokerStars becomes the epicenter of tournament poker featuring a wide variety of tournaments with three different buy-in levels, cumulating in the SCOOP Main Event.
All the information on the SCOOP

ZOOM Poker is an exhilarating version of full-ring poker. You are immediately seated at a new table the moment you fold your hand. The expedited process translates into more hands more hour and exponential fun with nonstop action.
All the information on the ZOOM

PokerStars offers up a fast and fun three-handed SNG that has varying prize pools based upon the spin of a dial. In Spin & Go, players have the opportunity to win up to 10,000 their buy-in in a Hyper-Turbo atmosphere. Spin & Gos are offered in both Hold'em and Omaha.
All the information on the Spin & Go

With The Deal you can turn your StarsCoins into huge cash prizes. You can learn how to earn StarCoins thanks to our offer on ''Star Rewards'' by PokerStars. Don't wait anymore to win the Jackpot !
All the information on the The Deal

The ultimate poker experience courtesy is arrived : PokerStars has launched Stars Rewards, a program to make you earn always more.
All the information on the Stars Rewards

Do I play on PokerStars?
I declare my nickname!

Sign-up on PokerStars through this link to enjoy our special offers, only for the Club Poker members.