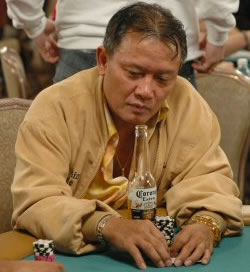 Sometimes the lede writes itself. Ice cream shop owner licks competition! Or how about, put down the hash pipe and Phish food Ben & Jerry, here comes Simon Lam! The SoCal ice cream shop owner is a pretty rad poker player. Lam put his poker skills on display at the Hawaiian Gardens as he final tabled the WPT Gardens and outlasted a final table that included the legendary Men the Master and one of the top American pros in the game with Jake Schindler.

The Gardens Casino aka the old Hawaiian Gardens played host to the first stop on the new season of the World Poker Tour. The first event for the 17th season (that's XVII for you roman numeral nits) attracted 584 players and a prize pool that was $2.9 million. This event attracted a significant amount of local SoCal players including a blast from the past, Men the Master.

Men went deep in this event and posted his biggest cash in nearly 8 years, but it didn't happen without old Men hijinks.

Men the Master was up to his old tricks and pulled of a "joke bet" during the late stages of the event. In a hand with Steve Sung, Sung moved all-in on the turn. Men apparently called after dropping two big blue chips (worth T100,000) onto the felt. When Sung tabled trip Jacks, Men apparently pulled back the chips.

"I no do nothing!" screamed Men the Master, obviously caught in the angleshoot. The TD went to the videotape and all hell broke loose. Men the Master had an open-ended straight draw... which he missed on the river.

Men the Master also passed out at the table at one point too. "Is this a drunken man gone wild? I dunno," said Joey Ingram (see video below).

Back to the action... Jesse Yaginuma bubbled the final table in seventh place.

Griener was the first player to exit the final table and went out in sixth place, Saya Ono was dunzo in fifth place. Craig Varnell was sent packing in fourth place.

Men the Master busted in third place, which set up the heads-up finale between Simon Lam and Jake Schindler.

Lam picked off Schindler heads-up for the win.

Jake Schindler settled on a consolation prize worth nearly $367K. Not too shabby, eh?

Lam shipped $565K in cash plus a brand new car. tell them what he won! It's a brand new 2018 Mercedes-Benz SLC Roadster!!! So sick. Cash and a pimped out ride.

In addition, Lam also won a freeroll into the season-ending Tournament of Champions (takes place in May 2019). That seat is valued at $15,000.

Men the Master finished in third place. Overall, Men the Master has won nearly $11 million in career earnings, but he hadn't posted a significant cash since 2010.