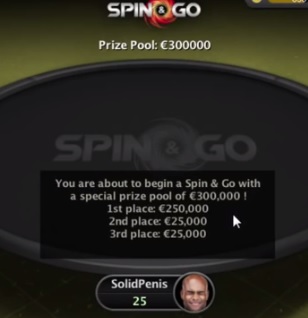 Who doesn't like a good penis joke? Poker players have amazing senses of humor and that weird sensibility often spills over into your online poker moniker. Then there's the Russian from Moscow who signed up for PokerStars under the screen name: SolidPenis. I know, I know. I'm shocked he was able to get that username! I figured someone would have already taken it.

The Russian who locked up SolidPenis was a small stakes player who liked to stream his sessions on Twitch. During his daily grind of Spin & Go tournaments on PokerStars, SolidPenis stumbled upon the motherlode. He signed up for a Spin & Go that increased the prize pool to a whopping €300K, or €250K for first place in theses three-handed events.

This special jackpot Spin & Go paid out all three places instead of the typical winner-takes-all. So third and second place locked up €25K each, but the three lucky jackpot winners were vying for the €250K first-place prize.

SolidPenis was on his stream for a minute or so before he realized how much was at stake for first place. Instead of a hundred quid or so, the first-place prize was an astonishing €250K. That special juiced-up jackpot was rare. According to a post on PokerStars Blog... PokerStars Team Online Mikhail 'innerpsy' Shalamov from Russia mentioned the prize pool was jacked up to a rare and redonkulous amount. "Happenes like once in a million tournaments?"

When SolidPenis was finally cognizant of the overall €300,000 prize pool, the astonished Twitch streamer was blown away. You couldn't hide his poker face that time. 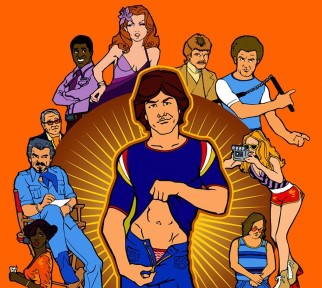 "It can't happen. It's not happening for real," uttered SolidPenis in Russian.

My Russian is not that good, but you could see a player that is overcoming utter disbelief and sorta freaking out but trying to regain composure as quickly as possible. He stepped away for a quick second to grab a bottle of water and prepare for the fight of his life. You could hear him breathing heavily while trying to stay cool.

SolidPenis was so shaky that he accidentally spilled water on himself and he screamed: "Calm down, motherfucker!"

SolidPenis even slapped himself in the face a few times in order to get his collective shit together.

Mikhail 'innerpsy' Shalamov commented: "While having those emotions inside your head, you still have to perform at a maximum level."

SolidPenis made a couple of tough laydowns along the way, which would have been instant-calls at much lower stakes. With so much money on the line, SolidPenis made some tough decisions.

SolidPenis was battling two opponents and a legit panic attack. His arm went limp at one point and even his body went limp. But he regained his cool in time to pick off one of his two opponents. 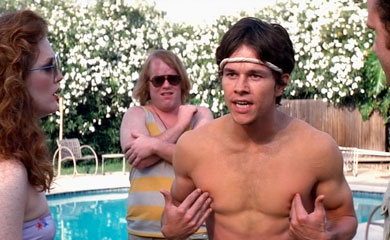 SolidPenis held 7-6 against his all-in opponent holding K-Q. "One time!" the Russian screamed in English. SolidPenis hit the money shot on the river when he spiked a six. Solid Penis knocked out the first of his two opponents. Only one player stood in his way of shipping €250K. SolidPenis held a 2-1 chip edge at that point. At worst, he'd lock up a consolation prize of €25K, but he wanted the prime beef and €250K.

For the final hand, SolidPenis went to battle with A-2 vs. 4-4. The pocket fours were no match against SolidPenis. His opponent flopped a four and took the lead with a set, but SolidPenis flopped a Wheel draw. SolidPenis took the lead on the turn when he turned a straight. He faded a potential full house on the river and his Wheel held up. SolidPenis won the hand and the Spin & Go. He was instantly €250K richer.

An elated and engorged SolidPenis ran around his apartment screaming something sounding like two seals having an orgasm. Then SolidPenis sat at his computer screen absolutely mesmerized for a few minutes. He checked the cashier to confirm whether or not what happened was actually real life or a random induced hallucination. Nope, the Russians are not slipping LSD into their water supply. SolidPenis checked the cashier and he had €250,330 in his account.

The chatbox blew up. Since SolidPenis was still streaming on Twitch, he had an audience to address. SolidPenis was overwhelmed with emotion and had no precise words to describe the feat. Instead, he uttered: "One important thing I can say...be kind to everyone, believe in love."

Sounds like winning €250K is akin to eating a couple of hits of ecstasy.

A humbled SolidPenis explained: "I'm not going to say I deserved it, or didn't deserve it!"

With a score worth €250K (or roughly $275K), SolidPenis won the most money ever recorded on a live Twitch screen.

Watch the video courtesy of PokerStars with PokerStars Team Online Mikhail 'innerpsy' Shalamov narrating and translating the victory by SolidPenis...