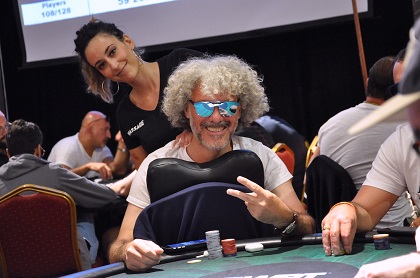 Ducks and pigs and chickens call, animal carpet wall to wall, would you know we're riding on the Marrakech Express... the Marrakech Express. There's a lot of tournaments these days, especially branded ones with the WPT stamped on its side. However, there's only one Morocco in the world and there's no place on the planet quite like Marrakech. There is not a funkier place in the world to host a poker tournament than an epicenter of international trade and a hub like Morocco.

In order to win the WPTDeepStacks Marrakech, the winner would have to outlast a difficult field of 454 runners and survive a final table that included the one and only Bruno Fitoussi.

The French poker legend has over $3 million USD in tournament earnings but he's won plenty more in cash and private games. Fitoussi is only 13th all time on the French money list, but he's always #1 in our hearts.

Despite a field dominated by French sharks and Franco-donks, a player from Spain survived the battlefield. Alejandro Roman outlasted everyone to secure the championship and stack of cash.

The top 71 places paid out with the majority of the cheesecake set aside to the final table the champion. The winner in Marrakech would bank six figures.

The French-heavy final table aslo included two players from Spain and one local player from Morocco. Pedro Ingles and Alejandro Roman represented Spain. Daniel El Keslassy was the lone local among the final nine and ggunning for a WPTDeepStacks title. Six players from France were at the final table including Silma Macalou, Jerome Zerbib, Pierre Antoine Quignard, Yohan Gonzales, Francois Tosques and the legdnary Bruno Fitoussi.

Jerome Zerbib busted first at the final table when he went out in ninth place. Pierra Quingnard followed JZ in eighth place. While Yohan Gonzales got messed with in seventh place.

Bruno Fitoussi met his fate with six to go and he bounced in sixth place. With five remaining, it came down to two players from Spain and two from France, plus DEK getting all the hometown mojo.

With three to go, it was two players from Spain jockeying for the title with Silma Macalou the last French player left standing.

Pedro Ingles could not figure out a way to stave off elimination in third place, which paid out 560K MAD. With Ingles out, Macalou held a slight lead over Roman.

The heads-up finale did not last longer before Roman gained the lead and put away Macalou. Roman won the final hand with a flush and