Special Sunday Million to be PKO this Sunday
by Pauly McGuire 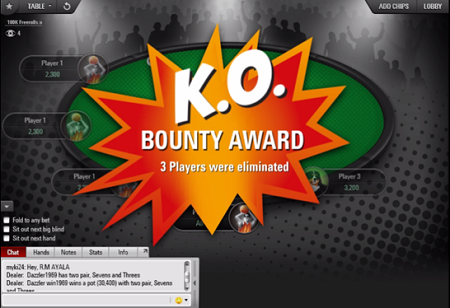 Another day, another special twist from PokerStars. They announced a special Sunday Million this weekend. The format got changed up a bit. On March 31, the Sunday Million will become a PKO. This special twist is part of the knockout Sunday promotion in which all of the nine major events on PokerStars will be a PKO format. This is great news for players who jump out to a hot start at the beginning of a tournament and then donk off the big lead and fizzle out before the money bubble.

In PKOs, players bank half the bounties they earn from busting other players. The other half boosts their own bounty, so the more players that you bust, the bigger the price on your head.

If you don't know, the Sunday Million buy-in is a mere $109 these days after they powers that be lowered the price and cut it in half. For this weekend's Knockout Sunday festivities, half of the buy-in, or $50 will be added to the bounty pool. At the start of the tournament, at least $25 will be awarded for every bustout. That number will increase as the tournament progresses.

If you can knock out four players, then you can win back your buy-in. Sounds like fun eh? Sunday Milly Knockout. If it's really popular, you can bet your entire roll that someone will make the decision to reboot the Sunday Milly as PKO all the time.

PokerStars has been trying to switch things up with new games and tweaks. They recently introduced their version of Short-Deck hold'em called 6+ Hold'em. That seems to be the one that should stick around. Last year they introduced Showtime Hold'em and Split Hold'em for a hot minute before taking those formats offline. It was fun while it lasted.

PokerStars will be throwing a 13th anniversary or birthday party for the Sunday Million in April. Last year, they had a 12th birthday party and no one showed up, so the result was a pretty steezy overlay. The suits pivoted on the not-so-good news and doubled down on the promo. PokerStars offered a Sunday Million 12 Mulligan promotion and tossed in a couple of juicy PSPC Platinum Passes and a lot more folks showed up to that party reprise.

Sometimes you need a little extra promotion and something for the little people. I mean, kick-ass music is always a must. I don't want to give them any free ideas, but maybe throw a Sunday Million Music Festival with Radiohead and they will break records for that one. Thom Yorke said it best, "Big fish eat the little ones, not my problem, give me some."

Anyway, mark your calendars. If you love PKOs, then head over to PokerStars and check out the Sunday Knockout events. If you don't have the time or bankroll to play in the Knockout Sunday Million, there are other events going on all day including the Sunday Storm, which will be PKO as well.