Everyone knows that Sundays are the big days for poker tournaments, with the Sunday Majors and the overall Sunday grind. PokerStars carved out Tuesdays as their second biggest tournament day of the week. The weekday affair includes a series of tournaments with buy-ins ranging from $22 to $1,050. The Super Tuesday is a big-time event that attracts some of the top pros in the game. The Super Tuesday also boasts a $150K Guaranteed prize pool.

There are early editions and late editions. Whatever works for you. You can also play satellites and win your seat into these Tuesday events. 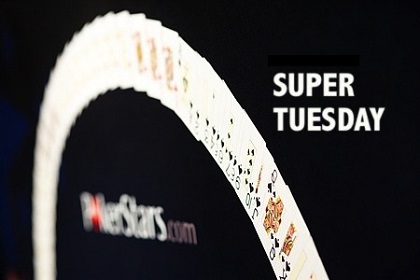 PokerStars organizes special tournaments that are pretty interesting for us, the poker players community. Come back and check this page regularly to get the latest offers.

Every September, PokerStars hosts the World Championship of Online Poker (WCOOP), a massive series of tournaments with millions of dollars in guaranteed prize pools. Buy-ins for WCOOP come in three different tiers to make this series access to players of all bankroll sizes.
All the information on the WCOOP

Every May like clockwork, PokerStars hosts the Spring Championship of Online Poker (SCOOP). During SCOOP, PokerStars becomes the epicenter of tournament poker featuring a wide variety of tournaments with three different buy-in levels, cumulating in the SCOOP Main Event.
All the information on the SCOOP

ZOOM Poker is an exhilarating version of full-ring poker. You are immediately seated at a new table the moment you fold your hand. The expedited process translates into more hands more hour and exponential fun with nonstop action.
All the information on the ZOOM

PokerStars offers up a fast and fun three-handed SNG that has varying prize pools based upon the spin of a dial. In Spin & Go, players have the opportunity to win up to 10,000 their buy-in in a Hyper-Turbo atmosphere. Spin & Gos are offered in both Hold'em and Omaha.
All the information on the Spin & Go

With The Deal you can turn your StarsCoins into huge cash prizes. You can learn how to earn StarCoins thanks to our offer on ''Star Rewards'' by PokerStars. Don't wait anymore to win the Jackpot !
All the information on the The Deal

The ultimate poker experience courtesy is arrived : PokerStars has launched Stars Rewards, a program to make you earn always more.
All the information on the Stars Rewards

Do I play on PokerStars?
I declare my nickname!

Sign-up on PokerStars through this link to enjoy our special offers, only for the Club Poker members.