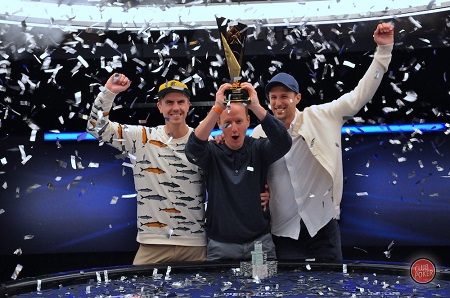 Ship it to Sweden! The 2019 European Poker Tour Main Event had another fantastic ending this year with Hungary and Sweden battling it out for the title and bricks of cash. Simon Brandstrom and Marton Czuczor chopped up the top two money spots and then slugged it out for the title, trophy, and bragging rights. Along the way, they faded a dangerous and deep field of poker enthusiasts from all over the globe that gathered for another season of the European Poker Tour.

The online poker industry and gambling world is rapidly changing and it barely resembles what the global poker scene looked like 15 years ago when John Duthie kicked off his concept of a poker tour exclusively set in Europe. The European Poker Tour was born and they never looked back. A lot of the faces have changed, but the EPT brand is still one of the strongest and most recognized in the gaming world.

PokerStars also used the EPT Barcelona to launch the next installation of the PokerStars Players Championship. Yup, mark your calendars for August 2020 because Barcelona will be the next location for the 2020 PSPC.

The 2019 EPT Barcelona Main Event had a €5,300 buy-in, which attracted 1,988 runners and a prize pool that topped over €9.6 million. That's amazing to think how far the EPT Barcelona has come since its inaugural event back in 2004 with the Barcelona Open that attracted just 229 runners for a 1K event.

In the 2019 EPT Barcelona Main Event, the top 296 players were awarded a piece of the price pool with most of the cheesecake set aside for the final table. Initially, the champ would warn €1,659,000 for a victory with only €884K to the runner-up. The final two players this year agreed to a heads-up chop in which both players banked over €1.2 million.

Kully Sidhu from the UK was the first player to exit the final table, which paid out nearly €122K. Italy's Pasquale Braco bounced in eighth place soon after.

Are we witnessing a Scandi resurgence on the tournament scene? Two Swedish players advance to the final table and one went the distance. Johan Storakers hit the bricks in seventh place, but banked nearly €227K.

Yunye Lu, Asia's lone rep at the final table from China, capped off an excellent week in Spain with a sixth-place finish worth €295,520.

Brazil's Diego Falcone was knocked out in fourth place for a score worth nearly a half-million in USD.

Two players from Portugal advance to the final table and finished in the top 5. Giovani Torre took fifth place while Rui Sosua busted in third place. Sousa earned a payout worth €607,400.

With Sousa busting, it set up a heads-up bout between Hungary's Marton Czuczor and Sweden's Simon Brandstrom.

According to the original payouts, first place paid out €1.65 million and second place would earn just €884,400. The final two decided upon an even money split with an additional 77K left on the table for first place plus the coveted trophy.

When the dust settled, Brandstrom picked off Czuczor. The Hungarian earned a second-place payday worth €1.25 million or approximately $1.37 million. Not too shabby, eh?