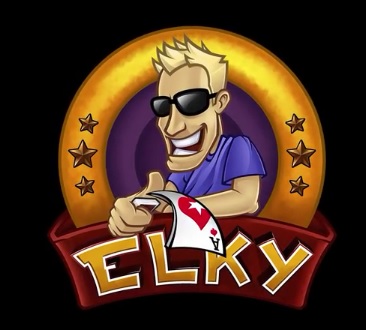 Elky is in a special league of cool that the only way you can be in it, is to have a single name. Like Madonna, Bono, Cher, and Elky. Elky is a superstar in two realms. So many of us struggle to even get by in our day to day lives, but Elky is a superhero with his ability to play online poker and video games with equal skill. Elky is one of the most talented gamers and gamblers in the world. His ability to jump back and forth between poker and egaming is similar to Bo Jackson's remarkable run as a professional football player with the Oakland Raiders and a professional baseball player with the Kansas City Royals. The scary thing about Elky is this…he's still very young. Who knows which other realms and hobbies he'd quickly pick up and excel at instantly whether it is golf, cooking, or playing the guitar.

As much as we think it comes naturally to Elky, he definitely struggles to stay competitive in both worlds, while maintain a healthy balance with life. Check out a quick video clip of Elky and ESPN.

Elky recently posted a new series of video blogs titled The Elky Diaries. The first episode is “TwitchCon 2016 & and €1 million One Drop Event.” Elky and his girlfriend Jenny kicked off the episode with a quick update from the airport. Fitting that the first scene would take place in an airport because Elky essentially lives out of his suitcase and travels nonstop for work and pleasure. He was in Prague for a quick minute before heading back on the road.

Elky sported colorful hair, which he had dyed especially for TwitchCon. It took them 23 hours to fly door-to-door from the US to Prague, but those of the hero trips that Elky pulls off. Elky showed off some local Czech cuisine before he headed to Monte Carlo and Monaco for the last batch of footage.

Elky went to Monte Carlo to watch the Big One for One Drop. This special event with a €1 million buy-in was closed off to pros by organizer Guy LaLiberte because he wanted rich guys and amateurs to play without feeling they're being hunted down by sharks. Elky and Jenny got some stealth guerilla style footage inside the casino. Loved their rogue camera work.

Watch the first episode of The Elky Diaries here…