The Feud: Daniel Negreanu continues to chip away at Doug Polk
by Pauly McGuire 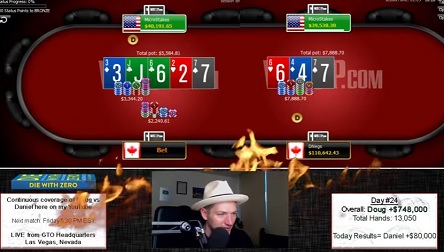 New year, but the Doug Polk and Daniel Negreanu High-Stakes Feud continues. And Kid Poker continues to grind his way to small wins. But when you're in for the long haul, chipping away with any win or whatever you can by any means necessary is always a step in the right direction even if this heads-up challenge and nosebleed battle continues for couple more months.

"As agreed upon in the rules I have the option to quit. That is not going to happen," tweeted Negreanu.

Whomever trailed at the midpoint had an option to walk away or raise the stakes. Kid Poker decided to gut it out at the same stakes $200/$400 NL with two tables at once.

The two did not play on Christmas, but that doesn't mean they weren't trying to earn some scratch fleecing the fish!

"If you celebrate Christmas, You have to be a total psycho to spend the day grinding," joked Polk. "Christmas is unequivocally the best day to play online poker. Them be the rules. Godspeed out there."

After a week into 2021, Kid Poker won his third overall session in a row and one of the longest sessions in a while. The two jousted for 750 hands on Wednesday, which provided entertainment for anyone looking to turn off the news of the failed coup in Washington DC.

Plenty of action left in this battle between sworn enemies that have slowly become chummy and respectful for one another. Maybe they'll become BFFs after all of this and cure cancer or future coronaviruses together?

Heading into the second half of this battle, the two have a good feel about each other's general game, along with their in-game adjustments. Will it be super tight? Or super swingy? Can Kid Poker continue to chip away? Or will Polk unleashed some monster sessions? Can he launch another big run? Or could this be like the Galfond Challenge last year when Phil climbed out of a huge hole and went on a heater and took over the lead and then some? Tune in Friday to find out in the next session.