SCOOP
The Return of Gus Hansen?
by Pauly McGuire 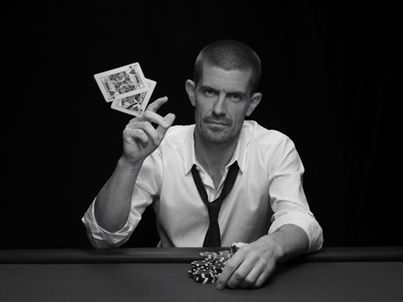 The return of the Great Dane! Gus Hansen was one of the first breakout stars on the World Poker Tour. His erratic playing style baffled old-school players while he played up the role as the lose-aggressive Scandi that was willing to go busto on any hand and on any street. Hansen had more gambool in him than the average pro at the time, which is why he was one of the fiercest players on the scene in the mid-00s.

The curve caught up to Hansen and all of a sudden thousands of LAGtard Scandis were playing like the Great Dane... loose, fearless and always pressing the action.

Supposedly Hansen got his ass handed to him by regulars in the Big Game at Bobby's Room at the Bellagio. Hansen won a few million on the WPT and marched right into Doyle's Room with his newly-minted bankroll.

Hansen had gone bust and robust so many times that it was hard to keep up. He's be around playing live cash games, on the tournament circuit, or at the nosebleed tables online...but when he'd go bust, he'd take a break for a while. Just when you thought he was down and out for good, he'd resurface with a vengeance. But a couple of years ago, Hansen took an extended break and had not been heard from in a while.

At the end of the summer, Gus Hansen sightings popped up on social media. He had been spotted playing cash games with Patrik Antonius and Phil Ivey. Daniel Negreanu confirmed the Great Dane sightings and mentioned the game had a throwback feel to the olden days of the height of the poker boom a decade ago. Shortly after, Hansen resurfaced online. Was this the beginning of the triumphant return of Hansen?

I was rusty, I basically hadn't played a hand of poker for a year. I still remembered the riles, but I was very rusty.

In an interview with Frank Op de Woerd, Hansen admitted he had not played a tournament in over two years. During the down time, Hansen got involved in the music business, but his venture did not do very well. Hansen remarked that his return to big stakes cash games in Vegas did not end up very well.

Hansen also shared his musings about not being haunted by bad beats, his friendship with the legendary Swedish pro Erik123, the foolishness of dinner breaks during tournaments, and why 48-hour marathon sessions were a bad idea.