The Rio officially sold to Imperial for $516.3 Million
by Pauly McGuire 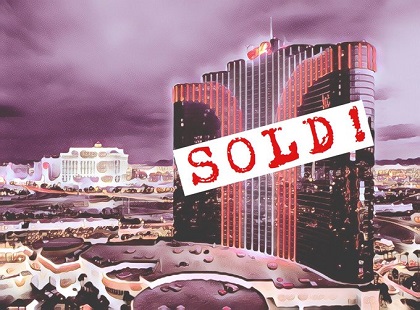 Well it's official. The Imperial real estate junta swooped up the Rio Casino in Las Vegas. What will they do with it in two years is the big question. For now, the Rio stays where it is because Imperial is leasing it back to Caesars for $5 million per year.

In the meantime, the World Series of Poker will continue its business as usual... at least for the next two summers. The lease is good for two years so who knows what will happen at the end of 2021? The WSOP will stay at the Rio until it most likely migrates to Caesars new convention space.

That's where the rumors get weird. Wasn't a baseball stadium supposed to be built at the Rio? What the heck will an NBA guy want to do with MLB? Does that mean he's moving the Milwaukee Bucks to Vegas? Will the Greek Freak become a Vegas Freak?

Not so fast... there's plenty of rumors and speculation, so why not stir the pot some more.

The Sacramento Kings have been rumored to be going to Seattle for a while. For a hot minute, Anaheim almost snagged the Kings. But why not Vegas? The Vegas Kings sound pretty dope. They'd be in the same Pacific Division as the LA Lakers, LA Clippers, Golden State Warriors and Phoenix Suns.

The NBA would love to expand to Seattle but they'd need another team to even it out at 32 teams. Currently, there are 30 teams with 15 in each conference and broken up into 5-team divisions.

Since Seattle and Vegas are out West, one current team has to move East. The New Orleans Pelicans or the Minnesota Timberwolves are the obvious choices with Zion and NOLA getting the nod out East.

As you can see, the Las Vegas expansion team would be automatic rivals with LeBron and the Lakers and Kawhi and the Clippers.

But let's say the NBA connection to the Rio is nothing but a dead end. There's still the MLB rumor. The baseball people know multiple franchises with horrible attendance that would love a new city and spanking new stadium. The Man would love to move teams to where fans will actually show up. Tampa, Detroit, and Miami are among the worst-attended games in MLB. Things are so bad in Tampa that the MLB is exploring splitting the season between Tampa and Montreal. That's silly, just move Tampa to Montreal and be done with the Rays.

As bad as the Big D might be, they'll never give up the Tigers. The Lions are up for debate, but the city of Detroit will cut everyone involved before they let the Tigers bounce... especially to Vegas.

Realignment is the problem. If a team wants to move to Las Vegas, it will be easiest of there's a western-based team involved, or at the least somewhere in the middle of the country. That means the San Diego Padres, Arizona Diamondbacks and Kansas City Royals are most likely teams to move to Sin City.

The KC Royals are up for sale and they used to be in the AL West so it's not too weird for them to swap, but they'd just leave them in the AL Central when one of the Texas teams should bounce over the AL Central.

The NL West seems the logical choice to target. Would the city of San Diego let their beloved Padres leave after the San Diego Chargers bailed for LA? The Las Vegas Padres as a nice ring to it. The most probable candidate are the Arizona Diamondbacks. The D-backs already play under desert conditions, so it wouldn't be much of a change for them. Just that Vegas is waaaaay crazier than Phoenix.

Maybe Derek Jeter is pulling a move out of Major League and he's tanking on purpose so he can move the team to Las Vegas. But the Las Vegas Marlins sound weird. It should be the Scorpions or better yet, the Las Vegas Jeters. With the LV Jeters in the NL West, that means the Colorado Rockies would have the bad luck of moving to the NL Central. In return, the Pittsburgh Pirates would return to the NL East.