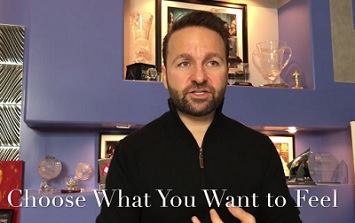 Bad beats. It's one of the worst things to happen to you at the tables. And hearing a bad beat story is one of the most annoying aspects of poker. But there's not a single session that goes by without a bad beating happening. it's just a part of the game, but how you handle beats is essential on becoming a successful poker players over the long term.

Negreanu admitted that he's lost a lot of money on bad beats. He assumed a portion of his viewing audience had watched him incur his fair share of bad beats on High Stakes Poker. He claimed to lose in excess of a million dollars on those beats and subsequent tilt. Negreanu explained those beats affected his play, which led to him bleeding more money that he should have.

Doesn't matter if you are a pro or a beginner...bad beats sting. And even the best players in the world take their fare share of shitty beats. The one thing that many of the most successful pros have in common -- their ability to bounce back quickly after a bad beat.

You've seen it happen before at the table, or maybe it's happened to you. Someone is crushing the table and running roughshod over everyone. And then they take a beat, but not just a beat, but a horrendous bad beat that makes everyone at the table cringe. Then it happens...the once unstoppable player goes on mega-tilt and in a matter of a few hands, they spew off their big stack, or go busto.

Bad beats are going to happen, not matter what you do. The hardest thing about bad beats is never knowing how badly a hand will sting. It might not happen right away and could come back and bite you in the ass later in the session. That's why having a strong mind is essential to defeating the lasting effects of a bad beat. You have to develop a thick skin. Almost bulletproof, or Teflon. That way the bad beats slide right off you and you can hunker down and focus on the next hand.

Negreanu also offered up some hippie new age stuff to work off a bad beat. He said to take three deep breaths. Sounds hokey, but it can help stave off mega-tilt.

Negreanu's hand breakdown of the week occurred during the 2017 PokerStars Championship in the Bahamas between Glaesel's Ac-6c vs. Opalikhun's As-10s. This video is titled “Aggressive Bet or Free Card.” What do you do when you're last to act in a heads-up hand with a draw… do you check the flop/turn to get a free card, or do you aggressively make a bet.