HOT !
The Weekly Negreanu: Bubble plays and a hand in the Bahamas
by Pauly McGuire 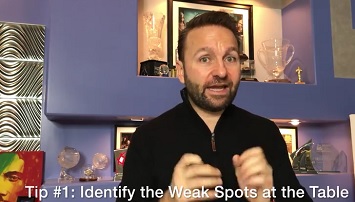 Kid Poker is all over YouTube these days. Daniel Negreau's recent social surge includes two videos per week, which he uploads directly to his YouTube channel. Danny Boy throws up content on Thursdays, which specifically focuses on hand breakdowns. And Danny Boy's Tuesday videos are comprised of poker tips. Daniel Negreanu is using his YouTube channel to teach and share teaching tools for both beginner and intermediate players.

In the first video, Negreanu posted a hand breakdown which appeared at the end of last week. This hand occurred at the 2017 PokerStars Championship in the Bahamas during the Main Event that Christian Harder eventually took down.

En route to his victory, Harder got involved in a hand against Mike Gentili that Negreanu wanted to point out. Christian Harder held Ks-10s against Mike Gentili's A-Q. Gentili opened with a raise and Negreanu suggested that Harder had options to re-raise or flat-call, which goes against the philosophy of raise/fold poker. The flop was 10-3-2 and Harder took the lead with a pair of tens. Negreanu wondered what would be the best play on the river for Harder.... value bet or check-call?

Watch how the hand plays out below and hear Negreanu's suggestions on what to do in similar situations...

This week's poker tip by Negreanu involves bubble play in tournaments. The Bubble is always one of the most exciting times in any poker tournament. You really need to have a specific game plan when the bubble arrives in your tournament. Do you shut down and let aggro/shorties slug it out? Or do you go on the offensive and accumulate blinds/antes from passive tablemates?

Typically, your strategy was determined by your own stack size, but Newgreanu suggested you pay attention to your table and size up your opponents. If there are any weak spots or obvious passive players, then you should attack on the bubble. Negreanu also advised to avoid big stacks on the bubble. Negreanu also suggested that you should try to maintain your big stack, and be careful about calling all-ins from short stacks…especially when holding a weak hand. Watch the poker tip video here…