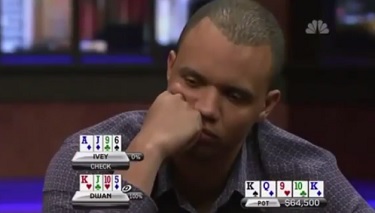 The hardest-working man on YouTube posted a couple of more videos or your amusement and education. Daniel Negreanu added two videos to his YouTube channel, which has been highly-active in 2017. Negreanu continued his series on mixed games and gave a quick tutorial on Limit hold'em. He also delved into PLO cash games and picked the hand of the week from a PLO session from the popular TV program Poker After Dark.

PLO is tough as is, especially in cash games. Toss in a pair of sharks, and playing PLO is utterly lethal. At the time this event was taped on NBC for Poker After Dark, Phil Ivey was undoubtedly the Big Dog in all of poker and Tom "durrrr" Dwan was regarded as one of the top online players in the world. For the hand discussion of the week, Negreanu discussed a PLO cash game hand between those two legends: Ivey and durrrr. The biggest takeaway from Negreanu, "You always want extra outs!"

In this particular hand, Ivey rivers a Broadway straight, but it also filled in a full house for Dwan. On the river, Dwan shoved and Ivey had to make a tough decision to call in this $104K pot.

Daniel Negreanu is eager to play a lot of mixed games at the 2017 WSOP this summer in Las Vegas. He decided to post a mini-series of videos on mixed games. Negreanu has been giving his faithful fans quickie tutorials on mixed games such as Seven-card Stud, tips on PLO, and now... Limit Hold'em. If NL is an art, then LHE is a science.