FUN
The Weekly Negreanu: Poker with Miss Finland and How to Play Stud 8
by Pauly McGuire 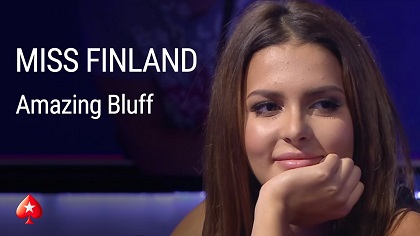 The hardest-working Canadian living in Vegas YouTuber continued his streak of weekly content this year. Daniel Negreanu added a couple more videos to his channel. He's been doing it all with strategy videos, vlogs, tutorials on different games, and old school PokerVT videos.

Did he ever tell you the story about Miss Finland Sara Chafak? Negreanu added her video to the mix this week. In preparation for the upcoming WSOP in Las Vegas, Negreanu continued the mixed game genres. He filled in the last letter of H.O.R.S.E.

The mini-series on mixed games continues. In previous videos, Negreanu delved into PLO, Limit Hold'em, Seven-card Stud, Omaha 8 and Razz. In this video, Danny Boy delves in the last letter in the H.O.R.S.E. Yup, Stud 8 or Stud Hi/Lo. It's a must-know game if you expect to play HORSE. I've seen so many people neglect that aspect of HORSE and get crushed by their inability to play Stud 8 effectively. Negreanu gives you a quick tutorial and some basic strategy.

Miss Finland Sara Chafak and Robbie Bardah entered the Shark Cage, and she bluffed the shit outta him with Ace-high versus trips! Negreanu hand-picked this video, which is one of the most viral vids of all time...