FUN
The Weekly Negreanu: Three-barrel bluffs and defending your blinds
by Pauly McGuire 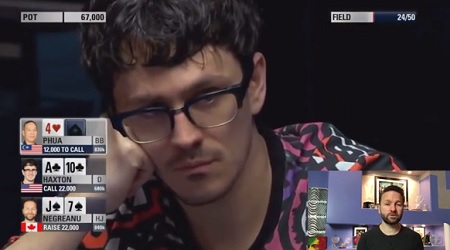 The hardest-working man in poker is back with more fresh content. Daniel Negreanu posted new videos for your viewing pleasure. He has been posting a general tip for noobs and intermediate players. He also has been posting a specific hand breakdown video.

This week's content includes a tip on defending your blinds. This week's hand history delves into three-barrel bluffs based on a hand that Negreanu played against Ike Haxton at the EPT Monte Carlo.

In the first video, Negreanu discusses defending your blinds. He wanted to focus on three specific areas. No matter what, Negreanu suggested that players should defend your blinds as a fundamental rule against min-raises and small raises. In the second line of thought, Negreanu advises to play cautiously on the flop and post-flop…so to defend your blinds but not to overplay your hands. For the third area, Negreanu wants you to gauge the quality of player of the raiser. He suggested that you play tighter against players you don't want to battle on the flop against. Ergo, avoid the better players when they raise your blinds and attack weaker players when they raise your blinds.

In the hand breakdown video, Negreanu took a flashback to the EPT Grand FInle in Monte Carlo. Negreanu held Js-7s in late position and tried to steal the blinds. Haxton smooth-called on the button with Ac-10c and Paul Phua defended his big blind and called with 4h and an unknown card. The flop was A-K-4 with two clubs. Phua checked, Negreanu fired out, Haxton called, and Phua folded. Heads-up. The 6s fell on the turn. With approximately 151K in the pot, Negreanu had to make a decision on the turn, so he fired out 85K. Ike snap-called. The Qd fell on the river. The question becomes… is it a good card for Negreanu, or a good card for Ike? With 321K in the pot, Negreanu fired again for a triple-barrel bluff. He bet 185K on the river with nadda. To find out what Ike does… watch the video.

Also, here's an added bonus! Negreanu started posting his podcasts to YouTube. There are no videos, just audio, but here's another avenue to listen to Negreanu's musings. He kicked off his inaugural episode of the Full Contact Poker Podcast with renowned poker agent Brian Balsbaugh from Poker Royalty. Balsbaugh shares some of his memories of the peak of the online poker boom a decade ago among other things. Give it a listen...