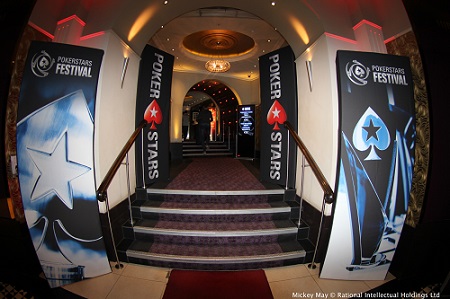 Pic by Mickey May, PokerStars

Jake Cody will be among the sponsored pros who will be in attendance. "I'm really looking forward to the festival in London," explained Jake Cody in a PR blast. "It's not often I get to roll out of my own bed to go and play a big PokerStars event with friends. Players can expect a great atmosphere and schedule. Plus, there are three free $30,000 PSPC tickets to be won throughout the event!"

PokerStars is also adding three chances to win a Platinum Pass to the inaugural PokerStars Players No Limit Hold'em Championship a.k.a. the PSPC. If you want a freeroll to the PSPC, you have to simply win one of three events in London... the PokerStars Festival London Main Event, High Roller, and/or the London Cup.

For complete information and schedule for the 2018 PokerStars Festival London, check out the PokerStars Live website. As also, head over to PokerStarsBlog for more details.

Now, here's the part when I'm too lazy and I cut&paste the press release so I don't miss anything important!

SPIN YOUR WAY TO LIVE POKER IN LONDON

Players can win their entry to the £500,000 guaranteed Main Event through special edition $11 (€15 on pokerstars.fr) Spin & Go tournaments, which run until January 19. Each Spin & Go package is worth approximately $3,100/€2,610, and includes entry to the Main Event, five nights' five star accommodation for two at the Radisson Blu Edwardian and $365 / €310 for travel expenses.

Players can also turn a small investment into a big win through a wide range of satellites currently running online at PokerStars. Last year, 23-year-old law student Rehman Kassam from London played a live £120 PokerStars satellite and took home the Main Event first prize of £89,320, the largest win of his poker career.

Before I go, just wanted to let you know that PokerStars HQ added four new events to the global touring calendar including a spot on the old-school APPT. Yup! PokerStars Live added four events... including the MEGASTACK London in late February, MEGASTACK Sanremo in Italy in March, APPT Korea in April, and Manila Megastack in late April/early May.

PokerStars and Red Bull are two massive global brands that will work together on a multi-year partnership with the Red Bull Racing team. Get ready to see the red spade among the advertisements on Red Bull Racing cards in the 2022 Formula One season. It's a win-win union for fast-growing spectator sport and high-paced Formula One circuit.

The 2022 PGT Stairway to Millions at the Aria Casino concluded in a fun high roller gathering with escalating entry fees during the eight-even series. Event #8 $100K NL attracted 19 players. American pro Nick Petrangelo was the last player standing and he survived a final three that included David Peters and Sean Perry to win $1.026 million. He won back-to-back events including Event #7 $50K and rocketed to the top of the 2022 PokerGo Tour Leaderboard.

The first PokerGo Tour events of 2022 at the Aria Casino in Las Vegas are underway with their new series called Stairway to Millions. American pro Chance Kornuth won back-to-back events over the weekend. Stairway to Millions Event #2 $2,150 NL attracted 129 runners and Kornuth outlasted everyone to win $51,600. Kornuth continued his run good with another victory in Event #3 $4,200 NL. He was the last player standing out of 84 runners and banked $80,640.