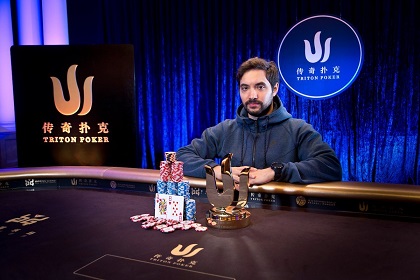 Jeju has quickly become one of the hotspots for high stakes poker in the world. It's become a favorite stop in Asia for many North American high rollers. So it was no surprise that the final six in the Tritron Super High Roller Main Event included six North Americans. Four Yanks and a pair of Canucks were among the last six standing. And when the dust settled, Canada came out on top of America with Tim Adams taking home the title and biggest cash score in Jeju this series.

The 2019 Triton Super High Roller Series in Jeju, South Korea featured the anchor event, otherwise known as the hefty 2 million HKD buy-in flagship Main Event championship. In Benjamins, that's roughly a $250K buy-in Super High Roller. In all 32 brave souls took a shot with 16 re-loads. Yeah, there were 16 re-entries for a total of 48 in the Main Event. The prize pool topped 90.2 million HKD. Only the top six places paid out with all of the cheesecake set aside for the big dogs up top.

The final table in the Jeju Main Event was a who's who of elite tournament players on the high roller scene. I guess the big surprise was who wasn't at this final table (e.g. Badzman or ZeeJustin). Then again, the final table line up is not your motley crew of unusual suspects. These were the prime suspects: Ike Haxton, David Peters, Dan Smith, Peter Jetter, Bryn Kenney, and Timothy Adams.

Kenney kicked off 2019 with a bang down under when he won the 2019 Aussie Millions Main Event. He flew back home to the State to play in the US Poker Open at the Aria and shipped one of those high roller titles before he hopped back on a plane and flew to South Korea for the Triton SHR Series in Jeju. Kenney banked $2 million in winnings and it's only the start of March.

Kenny could not win this one, but he got himself in a spot where he was heads-up for the title with Timothy Adams. Kenney held a slight lead in chips. They agreed to a money-chop (24 million KHD each or $3 million USD) and left a little cheese on the table to play for (approx. $500K USD).

Adams emerged the supreme victor. He walked away with a little more than $3.5 million. Kenney took home $3 million for a runner-up share. Not too shabby, eh?

Dan Smith hit the bricks in third place, which paid out $1.7 million. Smitty's elimination set up the heavyweight bout between Adams and Kenney.

Meanwhile, the Triton Series in Jeju has come to an end. It was another exciting series with victories by Justin Bonomo, Devin Tang, and Jason Koon. Last year, Mikita Badziakouski made a name for himself with a big win in Jeju.