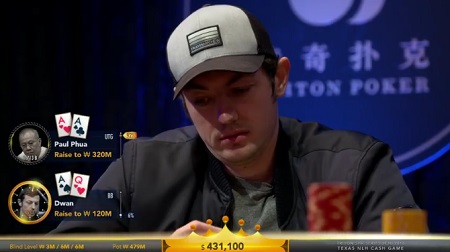 How about a $2.3 million pot? How about a televised pot that ginormous? Did it make televised poker history? I dunno. It's too early in the morning for my brain to think about such difficult things and I'm too lazy to ask the Googles what's up. So, let's qualify it as "one of the largest pots in televised poker history" occurred at the 2018 Triton Super High Roller Series in Jeju, South Korea. The Landing Casino in Jeju hosted the festivities, which also included a series of cash games.

In the first hand, Phua and Dwan battled in a smallish pot (all things considered). Phua whiffed on a Broadway draw and a flush draw, while Dwan only had Jacks up. That would be foreshadowing of things to come.

On the second hand, we saw fireworks thanks to a straddle.

from the big blind. Phua reraised another $300K. Nitshce folded. With $431K in the pot, Dwan went into the tank. With a straddle, you never really know where you're at, but Dwan felt that he could get Phua off this pot if he shoved.

After a lengthy pause, Phua called a clock on an indecisive Dwan. Dwan only took a little more time to think before he announced, “All-in.” Phua snap-called. After Dwan moved all-in for approximately $1M, the pot swelled to $1.48M. The total pot was worth $2,353,500.

The board did not help Dwan, which ran out

. Aces held up for Phua and he dragged the monsterpotten.

"I thought his hand was going to be much worse than that," said Koon. "To be fair, I thought your hand was full of shit too!"

Aces in the straddle. Live poker is rigged, right?

And you can catch other Triton Cash Game episodes on their YouTube Channel. Watch all of episode 6 here...