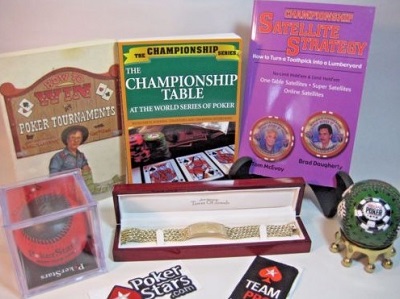 If you ever wanted to “buy” a bracelet then I have a deal for you. The 1983 World Series of Poker Main Event Champion, Tom McEvoy, put his coveted gold bracelet up for sale. For only $15,000 (USD), you can get the bracelet and a grab bag of memorabilia. The Las Vegas pro and author is a member of the Hall of Fame after getting the nod in 2013. McEvoy was once sponsored by PokerStars during the height of the online poker boom in the mid-2000s. McEvoy has not had a major sponsor in years, which is probably why he put his bracelet up for sale. The account on ebay is listed as “ronniescollegefund.” College tuition is redonkulously expensive in America, so McEvoy is trying to sell a piece of history in order to help pay for Ronnie's college.

According to Hendon Mob, McEvoy has won $3 million in tournaments since 1983. The four-time bracelet winner cashed in the 2106 WSOP Main Event (644th place for $18,714), which marked his biggest score since winning an event at the Wynn in 2007.

At the 1983 WSOP, McEvoy faded a field of 108 players to win the $10K Main Event. McEvoy's final table included Doyle Brunson (3rd place) and Donnacha O'Dea (6th place). McEvoy beat Rod Peate heads-up for the title. First place paid out $540,000 million in 1983. McEvoy revealed that he had a backer in the Main Event (Johnny Chan staked him in the first-ever satellite), so he only banked half of the prize or a little more than a quarter million.

McEvoy is a also part of poker trivia. He was the first player to win a satellite into the WSOP Main Event. Now you can own a piece of poker history by purchasing his 1983 bracelet. McEvoy was also responsible for getting poker rooms to chance their smoking policy. When I first moved to Las Vegas in 2005, you could still smoke at the tables at many casinos. However, many poker rooms had a no smoking policy thanks to McEvoy's efforts.

In the years after McEvoy's Main Event win and before the glorious online poker boom, McEvoy penned a series of poker books including How To Win at Poker Tournaments, The Championship Table at The World Series of Poker, and Championship Satellite Strategy. During the poker boom, any poker-related strategy book was gobbled up by the masses. In wake of the U.S. Government and Big Brother shutting down online poker in America, the poker book market imploded. Sales were down across the board. McEvoy, like many other poker authors, lost a lucrative revenue stream overnight.

McEvoy listed his bracelet on ebay for $15,000. In addition to the bling, the winning bidder also gets a bunch of other stuff in what he dubbed as a “Memorabilia Collection.” 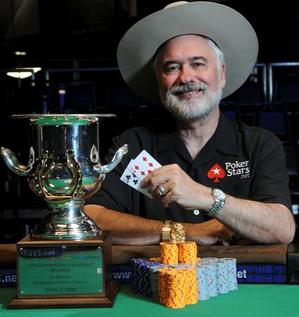 A slew of wealthy semi-pros often go bracelet hunting at the World Series of Poker. Pros with bracelet bets, like Jason Mercier at the 2016 WSOP, often seek out the smallest fields to increase their win percentages. For the last decade or so, the media has emphasized a premium of WSOP bracelets, so many cash game pros without one went on their own personal quest to bring home the bling. And pros with one or two bracelets were trying to win another in order to differentiate themselves from the luckboxes who donked their way to a longshot victory.

Pros and wealthy semi-pros go bracelet hunting at the WSOP in Las Vegas and at the WSOP Europe. Those bracelet hunters look for “fetish” events with small fields. Typically, those Deuce to Seven, Triple Draw, or other Lowball events are smaller fields, but the few tables are stocked with pros. Then again, it might be easier to harness short term luck and navigate a smaller event infested with sharks then to go the distance in one of the weekend donkaments. Would you rather go swimming with sharks, then get trampled by donkeys?

But if you just want a piece of bling to show off your friends, then you have a perfect opportunity to own a bracelet for a mere price tag of $15,000.

In case you were wondering, Tom McEvoy is not the first WSOP champion to sell a Main Event bracelet. Jerry Yang and Jamie Gold, who both won the Main Event at the peak of the online poker boom, auctioned their bracelets for cash. Peter Eastgate also sold his bracelet, but Eastgate donated all proceeds to charity.