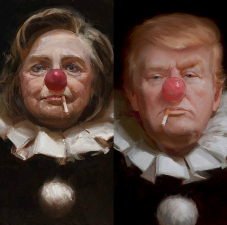 A couple of months ago, it appeared as though Donald Trump (Republican primary winner) was only a couple of points behind Hillary Clinton (Democratic primary winner). Alas, a lot has changed in the race for supreme leader of America over the last several weeks. Trump's numbers have hit an all-time low, while Clinton's numbers are trading at an all-time high. You'd have to lay roughly $5 to win back $1 on Clinton, whereas you can gamble it up and try to get 3 to 1 on your money by backing Trump. It appears as though Trump's campaign has run out of gas and even he seems tired of his same old scaremongering shtick. Unless some sort of major scandal or terrorist attack occurs in the next coming weeks, Trump's numbers might grow even weaker.

Polls are polls. Even in the digital era, it's difficult to get the right numbers. Besides, there's always different ways for someone to analyze data and juke the stats. In the end, I'm more interested in what the bookies have to say than the talking head wonks. Who cares what TV pundits say? When it comes down to betting, you always want to know what the bookies really think. And right now, the bookies are taking in lots of money on Clinton and they don't have faith in Trump pulling off the upset.

The Trump train has run out of stream and he's in desperate need of an energetic push for his fan base. He's going to need a big push in the next month in key states if he wants to rally from behind to defeat Hillary Clinton in the November election. Since the shitshow of the GOP convention last month, Trump's numbers have been tanking and Hillary Clinton's price is getting more expensive every day. Trump is suffering from a combination of picking a dud of a Vice Presidential running mate (Pence is a huge snoozer), overall campaign fatigue (Trump has never run for a major office before, so this is his first rodeo), plus a lack of competent political and campaign advisors has hurt his day-to-day operations.

Vice Presidential running mates can make or break a Presidential election. In 2008, John McCain failed miserably when he opted to add Sarah Palin trainwreck to the ticket. George McGovern shit the bed in 1972 when his first choice Thomas Eagleton was eviscerated in the press for having past bouts with depression and controversial electric shock treatments. When the bookies released their 2016 odds for potential GOP Vice President running mate, Governor Pence from Indiana wasn't even mentioned in the top 25. Many betting shops didn't even have him on the board. Meanwhile, Clinton picked Tim Kaine, who was one of the heavy favorites.

If you like gambling on longshots and think Trump can pull off an upset against the biggest political machine in American history, then you can pick up Trump at a bargain right now at 3-1. Or better yet, wait a couple more weeks when the odds grow even lower. He might sink to 4-1 unless he can deliver a piece of salacious scandal than can top all the other scandals the Clintons managed to deflect.

Bill Clinton once joked that he was “bulletproof” after Slick Willy survived the Whitewater and Monica Lewinsky scandals, and it seems as though his wife Hillary is as slippery and even more bulletproof. The Lizard Queen has been under constant siege between Benghazi and the email server brouhaha, yet she's still standing.

My advice is the same. You know what I think…shit is rigged for the establishment… and the establishment's candidate is Hillary Clinton. There's way too much at stake for Wall Street banksters, Big Pharma, Silicon Valley, Hollywood, Big Agra, and all the other major industries and foreign corporations that have been lining up behind Team Clinton. I've been telling you all year that you should bet as much as you can on Hillary Clinton. Don't stop now.