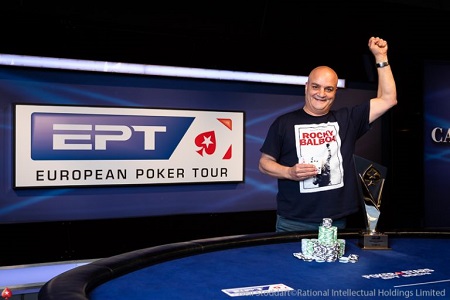 Ship it to Israel! Israel had two horses still alive heading into the heads-up battle at the EPT Sochi. History was about to be made. No player from Israel had stepped into the winner's circle in the storied history of the European Poker Tour. That is, until today. With two players remaining both from Israel, the country guaranteed its first-ever champion.

Uri Gilboa and Zakhar Babaev found themselves heads-up for the title. They were on the cusp of history when they slugged it out for the EPT Sochi Main Event championship. The buy-in was 191,800 and this event attracted 758 other poker enthusiasts from Russia and the region. They all converged on the swanky resort area of Sochi to determine who was the best of the best.

Out of the 758 runners, only two were left standing at the main stage. Gilboa and Babaev were seeking out glory and the Main Event title, along with a small mountain of cash worth $420K USD or so was on the line. In total, it was nearly 27.5M Russian Rubles at stake. And when the dust settled, Uri Gilboa walked away with the title after he delivered a history-making knockout blow against his fellow countryman.

Dmitry Yurasov would be the first player to exit the final table. Yurasov bounced in eighth place. Francisco Benitez's run ended when he hit the bricks in seventh place. With six remaining, four Russians remained along with both players from Israel.

Serafim Kovalevsky was picked off in sixth place, followed by Vyacheslav Mizun in fifth place. With four to go, only two Russians remained. They wouldn't be around much longer.

Ivan Ruban became the next player to fall when Ruban busted in fourth place. Maksim Pisarenko's epic run ended in third place. He banked 11.8 million Rubles for his deep run, which was worth approximately $177,975. With Pisarenko's elimination, that meant the heads-up battle would come down to both players from Israel.

The EPT Sochi title came down to a heavyweight bout between Uri Gilboa vs. Zakhar Babaev. Fitting to use the boxing metaphors since Gilboa wore a Rocky t-shirt.