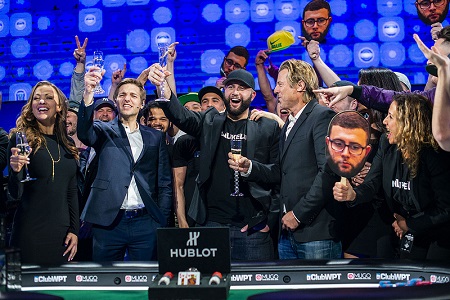 Vin, Viny, Vinicius. Ship it to Vinicius. The longest final table delay for this year's latest WPT event at the swanky HyperX eSports Arena inside the Luxor in Las Vegas. Yeah, another round of poker inside a pyramid complete with a guy named Viny Lima taking down the WPT title. Actually, his real name is Vinicius and he crushed the final table by coming from behind and storming back for the win. Heck of a run.

The Borgata Winter Poker Open is a special event hosted at the Borgata in Atlantic City every January. The dankest poker room in AC is where poker denizens on the East Coast migrate for a massive series to kick off the new calendar year. The Winter Poker Open's Main Event also is an annual stop on the World Poker Tour.

With six remaining, the action paused for six weeks. The final table resumed in Las Vegas inside the pyramid.

Dave Farah came into the final table with the chip lead and a big stack worth nearly 19M. Viny Lima was the shorty with 3.5M. Brandon Hall was second overall with 14M, followed by Dan Buzgon 9.1M, Joey Di Rosa Rojas 5.8M, and Ian O'Hara 5.1M.

Lima managed to avoid being the first one out.

Joe Di Rosa Rojas busted in third place. He cashed for $359,555. His bustout set up the heads up bout between Dave Farah and Viny Lima. I mean, that totally sounds like an old-school, 15 round epic fight at Boardwalk Hall in Atlantic City. Viny "The Puncher" Lima vs. Dave "Farwell" Farah.

The two fought a 46-hand heads-up bout. Farah led 34M to 22M at the onset. 70 minutes later, it was all over. Farah could not overcome Lima, who delivered a knockout blow with

Viny took home a cool $728,430 for his victory. He also won a freeroll (valued at $15,000 USD) into the season ending Tournament of Champions at the Aria.

The Baccarat Crystal TOC is a special event open to any former WPT champ for a $15K buy-in. Winners on the current season get a freeroll for winning their event. Lima will be there. Along with the WPT LA Gardens winner Frank Stepuchin, WPT Rolling Thunder champ Erkut Yilmaz, and ODB Baker who took down the WPT LA Poker Classic on Monday in the HyperX eSports Arena.