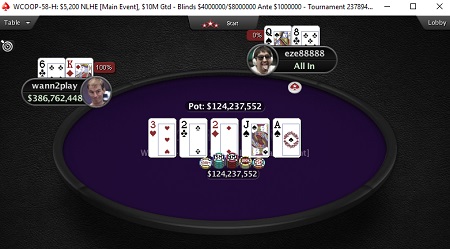 The 2018 World Championship of Online Poker (WCOOP) came to a sensational close with the conclusion of the Main Event. The top two players chopped and both walked away with at least seven figures. After a two-hour grueling heads-up bout, wann2play from the Netherlands shipped the WCOOP Main Event after knocking out eze88888 in second place.

Only 17 players returned to the final day od action. Linus 'LLinusLLove' Loeliger started the day with the big stack and almost twice as many chips as second place.

C. Darwin2 bubbled the final table in tenth place. The Swede is one of the top players in the world at the present moment and he narrowly missed his first WCOOP title. Tenth place paid out $72K for the Swede.

The Netherlands had two players at the final table including Noah 'Exclusive' Boeken and wann2play. Exclusive's run ended in sixth place, but he walked away with a nifty score worth $270K.

mczhang hit the bricks in fifth place and PlayaPlz followed in fourth place. With three to go, LLinusLLove was clearly the most-seasoned player still remaining. Alas, it was not meant to be.

LLinusLLove busted in third place after getting picked off by eze8888. LLinusLLove's

could not come from behind to ambush eze8888's

. Pocket cowboys held up for eze8888 and Linus 'LLinusLLove' Loeliger was dunzo in third place.

Linus 'LLinusLLove' Loeliger banked $764K for his troubles. Not too shabby, eh?

The two played heads-up for over two hours. It took only 23 minutes before wann2play seized the lead. eze88888 launched a counter attack and evened up the score before regaining the lead about midway through the match.

eze88888 opened up a 4-1 edge and had wann2play on the ropes, but couldn't deliver the knockout blow. wann2play doubled up with lowly 7-6 offsuit against pocket fives. Heck of a way to avoid elimination. That was eze88888's last chance to seal a win. wann2play rallied and never looked back.

wann2play needed a couple of times to finally knockout eze88888, who wasn't about to roll over and die so easily. It was a good fight and a heck of a heads-up bout. However, it was wann2play's day to shine.

On the final hand, eze88888 made a final stand with

Ship it to Holland!