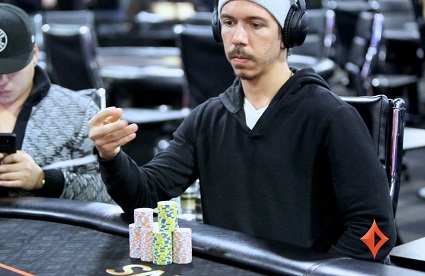 Can Darryll Fish pull off a comeback in Montreal? (Pic by partypoker)

Les neuf derniers! And then there were nine in Montreal. After almost a week of action, the partypoker LIVE MILLIONS North America is down to its final table at the Playground in Montreal, Quebec, Canada, North America, Earth. The overall Main Event, with its $5,300 price tag, was a smashing success and broke records as the biggest tournament in Canada. A total of 1,954 players were vying for a first-place prize of $1.4 million CAD.

Heck, even the runner up ships 1.2 million and third place walks with a cool million! Not too bad, eh? That buys a crapload of Tim Hortons, hockey cards, Gord Downie fedoras, and maple syrup.

Anthony Ruberto leads the way with 409M, but it's a close two-way race up top with Taylor Black right behind with a near-equal stack worth 406K. Can Darryll Fish pull off a comeback victory? The American pro is sixth overall with a shade over 152M. Meanwhile, if you want to root for an underdog, lookno farther than Charles La Boissonniere. CLB comes into the final table with the shortest stack and 45M.

Everyone at the final table locked up a min-cash worth $150K CAD. The juicy bits are at the top of the heap with the top three places securing seven-figure cashes and the champ walking away with $1.4 million CAD (which is approximately $1.08M USD).

Dan Strelitz bubbled off the final table when he busted in tenth place late last night as action dipped past Midnight and into the wee hours of Tuesday morning. November Niner Joe Cheong also busted late last night. The American pro was dunzo in 11th place and missed the final table by two spots. Ema Zajmovic tried to make another final table at her local card room, but she bounced in 21st place. The infamous online grinder Buck21 a.k.a. Shawn Buchanan cashed in the MILLIONS, but he could only finish as far as 178th place.

Watch the final table live stream starting at 12:45pm ET at the Playground Poker Club in Montreal. There will be a 30-minute delay, but you will be able to view hole cards...