FUN
Weekly Negreanu: Heads-up with Ivey and when to end a cash game session?
by Pauly McGuire 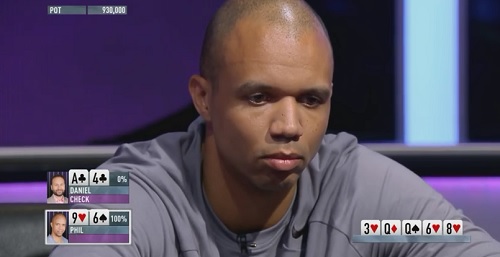 The Weekly Negreanu continues with two brand-new spanking videos. Last week, Negreanu posted videos about bubble play and a hand involving Christian Harder in the Bahamas. This week, Danny Boy went deep into his bag of tricks to discuss a hand he played against friend/rival Phil Ivey. Negreanu also doled out a valuable tip to cash game players. I know I have a problems figuring out when to end a poker session, especially when the game has flatlined or I'm near break even. Sometimes players either leave too early, or too late… which is why Negreanu has a tip on when to quit a session.

The first video is titled Negreanu vs. Ivey – Mind Games. The hand was recorded during a taping of Sharkcage, which is a heads-up battle with $1 million at stake. The loser got zero bucks and the winner walked away with a sweet $1 million. Ivey took 9-6 off suit into battle against Negreanu's Ace-rag suited. Although Negreanu was ahead with

: Ivey caught up on the turn and took the lead. Negreanu breaks down this cash game hand and discusses what to do what both players are familiar with each other. In this instance, both Ivey and Negreanu know their opponent doesn't have a strong hand and they're figuring out who's marginal hand is best.

The second video from Negreanu is a tip-based. Danny Boy offered up some valuable advice for both beginners and intermediate players. When do you quit playing a cash game? Negreanu shared some pearls of wisdom that he initially developed when he moved to Las Vegas in the 1990s to grind cash games. Negreanu explained that he diligently played from noon to 8pm every week day and that winning or losing, he racked up his chips at 8pm. Negreanu stressed the importance of setting a specific time limit. Of course, that goes against a lot of advice from other pros that suggest you walk away from a session early when you're playing bad or super tilty.

Of course, if there's a wealthy fish at the table spewing chips then you want to stay in the game so long as it is profitable for you. But Negreanu's advice is more a general tip about setting a specific time period and sticking to your integrity. It's not the best system to maximize profits, but it's important to have limits and discipline. Poker is a long term game, so you will always go back to the game. Alas, breaks were important.

“Play hours, not results,” explained Negreanu. “Because your mind tends to play tricks on you.”