SCOOP
Will Kassouf, Art of the Deal, and Max Silver
by Pauly McGuire 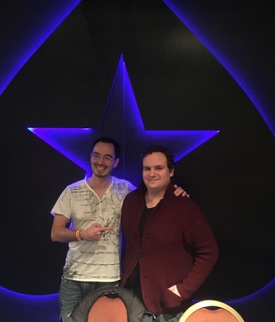 Will Kassouf and Patrick Serda wheeling and dealing in Prague

Will Kassouf won the EPT High Roller event in Prague last week, and the heads-up deal with Patrick Serda sent some ripples through the pond of tranquility known as the poker community. Most recently, Max Silver wrote a detailed post explaining that all the controversy surrounding the deal should be funneled back to him because it was Silver's idea for Kassouf to accept the title and less money. Serda won €719,000 for a runner-up finish, while Kassouf earned only €532,500 for first place.

Will Kassouf made a huge splash at the 2016 WSOP Main Event. If you have not watched any coverage of this year's WSOP, then I encourage you to watch some of Kassouf's antics via YouTube (or click here to see some of his chattiness). Kassouf was super chatty at the tables and yapped incessantly. Most pros didn't mind all the table banter, however, they were miffed that Kassouf's table talk was taking up too much time because he talked on every street. The table banter slowed down the action. At the same time, a lot of poker fans grew to hate Kassouf because of his verbal diarrhea. It's cute when Danny Boy Negreanu does it, but it gets old fast when someone else tries to talk a thousand miles an hour and never stop. Hey, it made for great TV and TV producers are always seeking out boisterous personalities for their broadcasts. Kassouf played the role of the villain on this year's WSOP Main Event coverage via ESPN, but then again, he made it easy for himself to be pegged that way.

Flash forward to Prague. The EPT13 Prague High Roller event would be the last of its kind before PokerStars rebrands their tournaments in 2017 onward. Kassouf was trying to prove he was not a one-hit wonder by going deep in the High Roller. Kassouf did that and then some when he made the final table. But he was done yet. He managed to get all the way to heads-up against Patrick Serda. That's when a deal discussion broke out. The terms of the deal were vague because poker media outlets do not cover the entire discussion – they typically just post about how much money each player is getting and perhaps some superficial comments about the length of negotiations.

When the final two finally shook hands on a deal, the poker world exploded when they found out the terms… Will Kaossouf would get less money than Patrick Serda, but he'd get the title, the trophy, and listed as “first place” in the history books.

In this instance, the deal talk went a little long but that's when Max Silver stepped in and tried to help both players get what they want.

In a detailed blog post titled The Art of the Deal, Silver explained that accepting the trophy and title was entirely his idea and not Kassouf's idea. If anything, Silver explains that Kassouf wanted to play out for the title…but after consulting with Adam Owen, Kassouf saw the long-term benefits of accepting less money because of the importance etching his name in history books.

Despite pretty much all of his friends telling him to take the deal Will wanted to fight on, he wondered if he'd regret having “not gone for it”. I strongly felt the deal was great for both parties, Patrick would get more money and Will would cement himself in poker history, not a one hit wonder. I believe that if Will plays his cards right after making the deal he would stand to profit significantly more in future career opportunities.

Watch the crazy hand against Canadian Griffin Benger that ended Kassouf's run at the 2016 WSOP Main Event in Las Vegas...