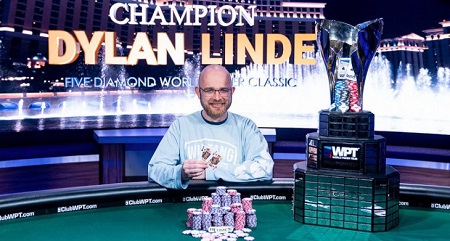 Ship it to Dylan Linde! The American online exile won his first-ever WPT title. It required five bullets in this re-entry event that attracted 1001 runners, but it was a worthy reload because Linde's $52K investment produced a windfall worth $1.6 million.

The $10,400 buy-in Five Diamond Classic Main Event also doubled as a stop on the World Poker Tour. It would feel utterly weird if there was NOT a WPT event at the Bellagio around Christmas time. It's just one of those things in poker that has now become a beloved tradition.

This year's re-entry event attracted 1,001 total entries. The total prize pool topped $9.7 million. The top 126 places paid out with the top two places walking away with a seven-figure score.

Hutter hit the road first at the final table, followed by Lisa Hamilton. She banked $452K for her epic run with a fifth-place finish. Ping Lui bounced in fourth place.

Lucky Chewey missed his chance to win this event, but he settled on a third-place finish worth $803K. Not too shabby, eh? With Chewey's elimination, that set up the heads-up battle between Milos Skrbic and Linde.

When the dust settled, Milos Skrbic hit the bricks in second place. His runner-up finish was worth a little over a cool million. And Linde shipped the majority of the cheesecake with a $1.6 million score.

Linde also gets a freeroll (valued at $15,000 per entry) into the season-ending Tournament of Champions, to be hosted at the Aria before Memorial Day next year.

Linde now has over $3.6 million in career earnings. He won a WSOP Circuit Ring at the 2016 WSOP Hammond in Indiana for $348K.

Rory Young, the Aussie pro who bet Rich Altai $100,000 he could not live in total darkness for a month, went deep in the WPT Bellagio with a finish in 18th place. Young banked $70,599 and he's slowly chipping away at his prop bet loss after he offered Altai a buy-out after 20 days.

The greatest-living WPT player, Darren Elias, went deep in this event but he missed the final table by a couple of tables when he busted in 41st place.

Over the years, the Bellagio has always been the place to be in December. The Bellagio's Five Diamond Classic capped off the end of the year with a lucrative series in Las Vegas. The Main Event doubled as a stop on the WPT beginning in 2002. The Main Event was renamed to the Doyle Brunson North American Classic for several years before it defaulted back to its original branding of the Five Diamond Classic.

The biggest winner happened back in 2007 when Eugene Katchalov went all the way for a $2.4 million score. 2005 WSOP Main Event Champion Joe Hachem won the second-biggest prize of $2.2 million. And Rehne Pedersen is the only other player to bank $2M.