Brian Rast is an OG gangsta. Seriously. He's got heart. He's got balls. And he's got that never-give-up-attitude that you like in your heroes. He won his third-career bracelet on Wednesday night and won the 50K Poker Players Championship for a second time. His career tournament earnings have now surpassed $5.5M at the WSOP and over $17.5M in total winnings. Yeah, astonishing!

Despite a 4-1 chip disadvantage, Brian Rast rallied from behind to catch Justin Bonomo during a grueling three-hour heads-up match in the $50,000 Poker Players Championship that was 6-handed this year. Rast eventually landed the knockout blow, much to the delight of his father from Colorado who was on the rail cheering on his son's relentless march toward victory. Rast faded a field of 91 runners iat the most prestigious event on the WSOP docket. Rast defeated a tough final table that also included two-time champion The Grinder. Rast now joins The Grinder as the only players who shipped the 50K PPC twice.

At the end of April, Rast shocked the gambling world when he won a prop bet worth $600,000 after Dan Bilzerian and Dan Perkins bet Rast that he could not ride a bicycle from Las Vegas to Los Angeles (approximately 320 miles) in less than 48 hours. Rast completed the insane task just under the deadline courtesy of the painkiller Vicodin, which held him fight through the intense pain.

I really didn't play perfect all the way through there were some times when I didn't play well... but this tournament, with the structure, it's very long and it's very forgiving because of how many chips you get. I was really, really happy with how I played, and happy how I played at the final table. 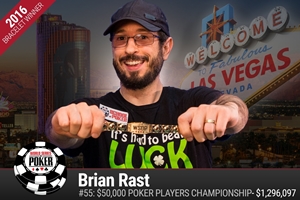 In the 50K PPC, Rast got heads-up with Justin Bonomo just before Midnight. The two would slug it out for over three hours. When the final bout began, Bonomo held a 4-1 chips advantage, but Rast chipped away at the lead to pull even. At that point, the lead went back and forth until Rast emerged victorious during a round of NL (Bonomo's Broadway straight lost to Rast's full house).

Rough day for Bonomo. In one sense, he should be proud of his accomplishments. He's been on a tear this summer...but he's the hottest player not to win a bracelet this summer. He now has two runner-up finishes and a pair of third place finishes. So close for Bonomo. He has moved up the ladder to second place in the WSOP Player of the Year race that seemed like it was gonna be easily won by Jason Mercier, but there's still a week of poker left in Vegas.