Say hello to three brand-new, first-time bracelet winners! The seventh time was the charm for David Peters. He had made six previous final tables at the WSOP with four top 4 finishes, but he finally broke through to the winner's circle during his seventh final table in Event #56 $1,500 NL. Peters earned his first bracelet and $412,557 for winning the OG Donkament. He's been on a rush this past week and even shipped the 25K at the Bellagio over the weekend.

David Nowakowski became an online exile to pursue online poker in Panama. The New Jersey native migrated to Central America to grind PLO cash games. He recently returned to the States to play in his first WSOP in two years. The results were epic... Nowakowski won Event #57 $1,500 PLO8 to win his first bracelet and $203K in cash.

Also, the third bracelet awarded on Tuesday night went to Corey Thompson, the champion in Event #58 $1,000 NL (30-min levels). Thompson is a working class kid from Florida who knows the value of a dollar. He won a bracelet in his first-ever final table appearance in one of the turbo running of the donks. Sometimes, one of the good guys wins.

Meanwhile, the 50K Poker Players Championship is down to a final table of six players. Justin Bonomo is the chip leader and he's trying to hold off a third-career 50K win from The Grinder. Also still alive and in the hunt got the PPC bracelet... Brian Rast, Ray Dehkharghani, Eric Wasserson, and Lamar Wilkinson. That final table will be on the live stream.

Down to the final table of six players. Justin Bonomo is the chip leader, but The Grinder is right behind in second and trying to win his third-career PPC title. Also still alive... Eric Wasserson, Brian Rast, Lamar Wilkinson, and Ray Dehkharghani.

First place pays out nearly $1.3M. Will Justin Bonomo go wire-to-wire? Or can the Grinder ship his third-overall PPC crown? 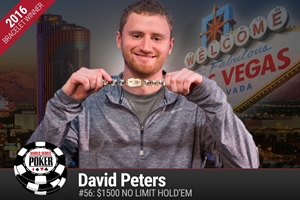 Day 3 of the forgotten OG Donkament began with 23 out of 1,860 and Matt Affleck in the lead. Affleck would bust in third place and David Peters would step into the winner's circle Just the other night, Peters shipped the 25K at the Bellagio for "back to back" tournament wins in Las Vegas. Peters earned almost $413 for winning the Donkament. He picked off Ireland's Cathal Shine in second place.

Ivan Luca and Faraz Jaka both busted just before the final table bubble. France's Adrien Allain finished in 15th place. Meanwhile, Ryan Laplante cashed again for his 11th time this WSOP. He's trying to break the record for most cashes. 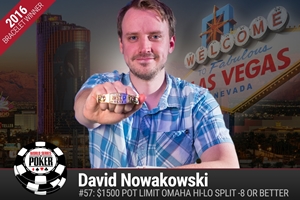 Marco Johnson was trying to join the 2016 Double Bracelet Club, but he fell short of the mark when he busted in third place. Instead, American David Nowakowski took down his first bracelet by defeating Canadian Tim Vuskon heads-up for the win.

Day 3 began with 16 players and David Nowakowski in the lead. The former Supernova Elite and PLO cash game specialist was an online exile who migrated to Panama to play online poker and hone his skills. He took a two-year hiatus from Vegas and the WSOP during his self-imposed exile. On his first trip back to America to play in the WSOP, Nowakowski shipped his first-ever bracelet... even though he plays more PLO than PLO8. First place paid out $203,113 for Nowakowski.

He also gave a great quote during his post-game interview: "I just decided to move back to the U.S. recently," Nowakowski said. "I plan on returning back to school and finishing up my degree in the fall, so this win definitely helps... I don't really like poker all that much."

Min-cash extraordinaire Tony Cousineau cashed for his 74th time in his storied career at the WSOP... and he's still one of the longest-running players at the WSOP never to have won a bracelet. 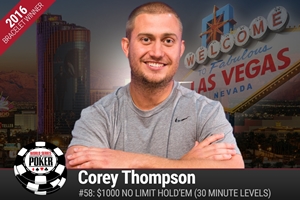 In this "turbo" event, 28 players returned on the final day and Corey Thompson was the last one left standing. Thompson is a working-class kid from Florida who made a name for himself last year when he won a Heartland Poker Tour event. He made his first-ever final table at the WSOP and managed to win in his first attempt. First place paid out $221,163 for Thompson.