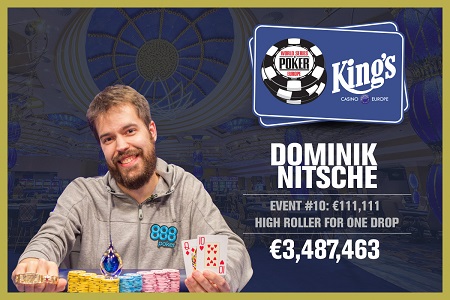 Ship it to Germany! The Germans proved, yet again, that they are the dominant force on the high roller scene. The WSOP Europe was no exception. German pro Dominik Nitsche binked the One Drop High Roller and won his fourth bracelet in the process. Nitsche took down a massive payout worth over €3.4M. The total prize pool for this event nearly passed the €13M mark.

This year's special high roller affair at the WSOPE attracted a total of 88 original runners. Some of the biggest names in Europe showed up at the King's Casino in RozVegas for a shot at a mountain of Euros and a sick piece of bling. Those 88 high ballas contributed an additional 44 re-entries, for a total of 132 entries. The total prize pool was a shade under €13 million.

Bracelet winner and local player Martin Kabrhel made the final table, but the Czech pro was the first player to exit stage left. Rec player Ahadpur Khangah from Iran went deep in the High Roller, but his magical run ended in seventh place. Khangah cashed for €466,421.

A handful of Germans made the One Drop final table... as expected. Christoph Vogelsang was dunzo in sixth place, Steffen Sontheimer busted in fifth place.

Meanwhile, Austria's Thomas Muehloecker was out in fourth place, but he walked away with a seven-figure payout for €1.1M.

Heads-up between Andreas Eiler and Dom Nitsche lasted 56 hands before Nitsche prevailed and knocked out Eiler in second place. For a dank run and runner-up finish, Germany's Eiler scored €2.1M.

Nitsche is €3.4M richer tonight... or €3,487,463 to be precise. The young German now has a fourth bracelet to add to his growing collection of WSOP bling. Nitsche previously won two bracelets in 2014, including the controversial 2014 WSOP National Championship at Bally's in AC. He won his first bracelet at the 2012 WSOP in a 1K donkament, which was worth $655K.

It seems like just yesterday (2009 to be exact), when a teenaged Nitsche shipped an event at the LAPT Argentina. Four bracelets and $11 million dollars later, Nitsche returns to the spotlight once again. Say hello to the newest One Drop Big Balla... Dom Nitsche.

British pro and psychonaut Charlie Carrel bubbled the final table when he busted in ninth place (for a €295K score).

The 2021 US Poker Open crowned two more champions at the Aria Casino in Las Vegas. John Riordan won Event #4 Big Bet Mix and outlasted 48 runners to win $163,200. In Joey Wiseman took down his first USP Poker Open title with an impressive comeback a victory in Event #5 $10K NL affair for $204,000 score. Joe McKeehen final tabled another event and moved into first place on the USPO Leaderboard.

The World Poker Tour added several new stops in 2021 for the Season XIX (aka S29) of its main tour including a first-ever online event. Tour stops include the WPT Maryland at Live!, the WPT Choctaw in Oklahoma, and the Bellagio and Venetian in Las Vegas. There's also three events in Florida including the bestbet Jacksonville, WPT Seminole Hard Rock in Tampa, and WPT Seminole Hard Rock in Hollywood. There's the inaugural $25K WPT Heads Up Championship hosted at Poker King starting June 18 featuring Phil Ivey and Tom Dwan.

Tony Parker, former NBA star with the San Antonio Spurs and member of the French national basketball team, is the first known player to earn a satellite into the 2021 World Series of Poker Main Event. Parker took down a charity event hosted by The PM Group, who awarded a $10,000 Main Event seat the Rio Casino in Las Vegas, which will start on November 4.

Renown gambler Archie Karas sat down for a candid interview with Soft White Underbelly. Karas is known on both poker and gambling circles for a notorious run in which he started with $50 and ran it up to the millions during the greatest winning streak in Las Vegas gambing history. Some say $20 million. Or $30 million. Or $40 million. Even Karas doesn't know the official amount because in the end, he went broke and busto. But for a moment in time, no one on the planet was a bigger gambler and high roller than Archie Karas back in the 1970s and 80s.

PokerStars is hosting the 2021 World College Poker (WCP) Main Event Championship exclusively on PokerStars.net for college students all over the world. The WCP is free to enter with the opening round beginning on July 24 at PokerStars.net with college and university students from all over the planet competing in six different regions. The winner gets a travel package to a European Poker Tour event and second place earns a long weekend of poker training from poker pros including Matt Berkey.

Russell Crowe returns to the big screen in the near future in 'Poker Face' playing a tech billionaire who seeks revenge on his old friends by crushing them in poker home games. Alas, his revenge plans go awry when there's a home invasion. The script was penned by Stephen M. Coates and Gary Fleder is set to direct the film that will be produced by Arclight Films.

The 2021 WPT Seminole Hard Rock Poker Showdown set a new record with 2,482 entrants for the $3,500 event and generated a prize pool worth nearly $8 million. The event ended in April with a short delayed final table that was played out in Las Vegas. Brekstyn 'Brek' Schutten outlasted the massive field and a tough final table that included Sonny Franco, Steven Snyder, Ken Aldridge, Albert Calderon, and Viet Vo. Schutten defeated Steven Snyder heads up for the WPT title and $1.2 million for first place.

The World Poker Tour played down another delayed final table with the conclusion of the 2020 WPT LA Poker Classic that began in March 2020 and had its final table delayed until now due to the pandemic. Balakrishna Patur outlasted a field of 490 runners in the 2020 WPT LAPC and survived a tough final table that included Matas Cimbolas, James Carroll, Upeshka De Silva, and Ka Kwan Lau and Scott Hempel. Patur banked $1 million and a free roll into the season-ending Tournament of Champions.

It only took 16 months and a world-wide pandemic, but the 2020 WPT Borgata Winter Poker Open finally has a champion. The $3,200 buy-in event started in January 2020 with 1,290 runners. They played down to a final table with Veerab Zakarian bagging the lead. They thought they were going to wait a couple of months and play the final table out in Las Vegas but the pandemic hit and delayed the final table until May 2021. WPT Player of the Year Brian Altman finished in third place and missed out on winning a third WPT title. Zakarian edged out James Anderson to win the title and $674,840.