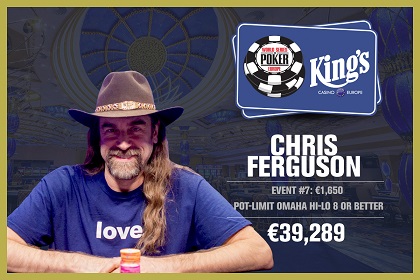 Ship it to Jesus. Chris 'Jesus' Ferguson won WSOP Europe Event #7 €1,650 PLO8. He faded a small field of 92 PLO8 enthusiasts to win his sixth bracelet. All five of Jesus' bracelet wins occurred before 2003. He was shooting blanks during the peak of the online poker boom in the post-Moneymaker era. Jesus went on the lam in the wake of the Full Tilt Poker scandal and he essentially ghosted the WSOP from 2011 to 2016. He made a token appearance at the 2016 WSOP, but it took a year for him to return to his full form.

The summer of 2017 was very kind to Jesus. Even though he was one of the biggest villains at the 2017 WSOP, even clad in his trademarked black hat, Jesus did not win a bracelet at the Rio during the summer. He fell short of the mark, but somehow Jesus cashed in 17 overall events. Jesus went on two deep runs and final tabled a pair of 10K events. Jesus was the runner-up in the $10K Seven-Card Stud Championship (losing to Mike Wattel) and he took fourth in the $10K PLO8 Championship. Those final table appearances thrust Jesus into first place in the WSOP Player of the Year race.

At the start of the 2017 WSOP Europe in Rozvadov, Jesus lost the lead briefly when Ryan Hughes went deep in the first event and overtook Jesus for a hot minute. However, after getting shutout in Event #1, Jesus embarked on a mini-rush in RozVegas and cashed in the next six events.

Jesus is now leading the POY race with 1,178.53 points. John Racener moved into second overall with 999.76 points, and Ryan Hughes slipped to third with 994.35. Jesus should win POY so long as neither Racener, nor Hughes go seriously deep in the Main Event.

Jesus outlasted a field of 92 runners to win Event #7 €1,650 PLO8. Italian pro Dario Alito was also at the final table, but he could only muster up a seventh-place finish. Jesus picked off Stanislav Wright heads up to win Event #7.

John Racener missed a final table by a few spots. The Florida pro cashed and finished in tenth place, which helped propel him into second overall in POY.