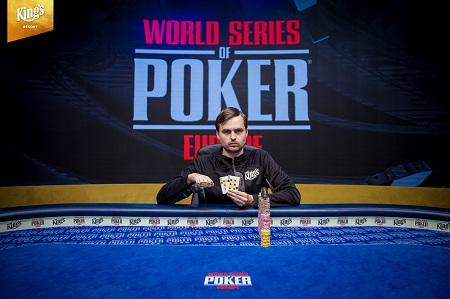 Ship it to the Czech Republic. Local player, Martin Kabrhel, won bracelets in consecutive years in RozVegas. Last year, he took down a Turbo bracelet event and this year, Kabrhel won the 100K Super High Roller. Kabrhel won the bling and €2.6 million in cash and outlasted one of the most difficult final tables in recent memory.

The biggest buy-in event at the 2018 World Series of Poker Europe played down to its champion on Sunday evening at the King's Casino. The ninth event on the 2018 WSOP Europe docket was the special €100,000 buy-in King's Super High Roller. This balla event attracted 95 of the premier high rollers on the planet and a prize pool worth €9 million.

With eight left in the hunt for the 100K bracelet, Mateos was the shorty with 10M. Nitsche bagged up the big stack with 53M. Badziakouski was second with 32M.

On Day 3, Michael Addamo was one of the first players eliminated. The Aussie's quest to win back-to-back WSOPE events came to a crashing halt when he was picked off in eighth place when his Ace-four were ambushed by Nitsche's pocket Kings.

Martin Kabrhel knocked out two players on the same hand when his pocket Aces held up against Dominik Nitsche's pocket Queens and Jan-Eric Schwippert's Ace-eight. Kabrhel chipped up to 51M with four to go.

Mikita Badziakouski's run ended in fourth place when he got picked off by Marty K. Ace-trey was no goot for Badz Man against Marty K's

Julian Thomas ran sixes in eights and hit the road in third place. The German's exit set up a heads-up finale betweeen Marty K and David Peters, and Peters held a sizeable lead 147M to 42M. It didn't take long before Marty K stormed back to pull even.

Heads-up was determined by a race. Big Slick versus pocket sixes. Kabrhel's pair held up and he won the tournament, and the bling, and the cash.

Kabrhel walked away with a score worth €2,624,340. Marty K won a bracelet last year at the 2017 WSOPE when he binked the €1,100 Super Turbo Bounty NL. This marked his second bracelet win.