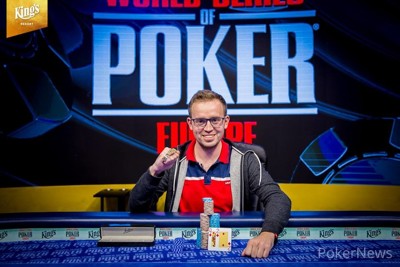 That went quick. Another tournament in the books at the King's Casino in RozVegas. Another bracelet awarded to a lucky soul. The fourth event on the World Series of Poker Europe schedule was a special turbo-charged event that also featured a bounty hunter. Event #4 €1,100 NL Turbo Bounty Hunter appeal to 387 hopefuls. They generated a prize pool worth €371,326.

German Florian Sarnow held the big stack heading into the final table, but he was down 3 to 1 in chips when he got heads-up against Mykhailo Gutyi. It didn't take long before the Ukrainian finished off the German. Gutyi denied Sarnow a wire-to-wire turbo win.

With ten remaining in the hunt for the bracelet, Florian Sarnow was the big stack with 1.8 million. Only two other players had 1M or more in chips.

Angelos Pettas ran into pocket fives and that's all she wrote for the Greek, who hit the rail in fourth place. Vangelis Kaimakamis was dunzo in third place, which set up the finale between Sarnow and Gutyi.

When heads-up began, Sarnow trailed 7.2M to 2.3M in chips. On the second hand, Sarnow doubled up and got back into contention. Alas, that was too little, too late.

Florian Sarnow got knocked out in second place and settled on a runner-up share worth €37,678. Mykhailo Gutyi from the Ukraine won the tournament, the bracelet and €61,299 in cash.