Two for Thursday! The 2017 World Series of Poker Europe is heading down its final stretch. Two more events concluded at the King's Casino in RozVegas and we have two more bracelet winners. Niall Farrell, the greatest player to hail from Scotland, shipped the 25K High Roller for his first career piece of bling. Farrell joined an elite club of Triple Crown winners (with his previous wins on the EPT and WPT). And chalk up another victory for the Czech Republic after a restaurant manager named Matous Skorepa binked The COLOSSUS. 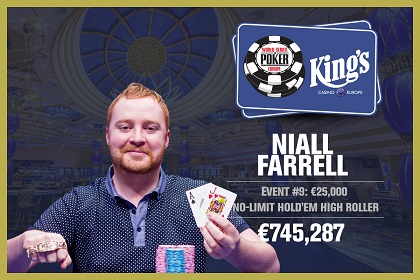 Ship it to Niall!

You have to figure Niall Farrell will eventually have statues erected in his honor all over Scotland. He's been the top pro from Scotland for a while now, but a WSOP bracelet somehow eluded him.

After several close calls and close shaves, including a pair of runner-up finishes at the Rio Casino in Las Vegas, Niall Farrell finally won a bracelet! The victory also netted him a Triple Crown... with victories on the WPT, EPT, and WSOP. Last year, Farrell won the WPT Caribbean Main Event for $335K. Farrell won the EPT Malta back in 2013 for a €534K score, which was previously his highest tally... until the WSOPE High Roller.

Farrell earned a payday worth €745,287. Farrell, ranked number one on the all-time winningest players from Scotland, boasts $4.4 million in tournament earnings. He will bank the equivalent of $867K USD for his high roller score.

The Scottish pro defeated a stacked field of high rolling specialists. The usual cast of characters and sharks were in this event, which meant Farrell outlasted one heck of a field. Farrell picked off French pro Benjamin Pollack heads-up for the bracelet. Pollock took home €460,622 for a runner-up score. Pollock has been in the middle of a sick sick sick heater.

The Germans were well represented in the WSOP Europe High Roller. Ole Schemion made the final table, but he was the first player to exit. Fellow German Stefan Schillhabel finished in seventh place. Meanwhile, Claas Segebrecht finished in third place. 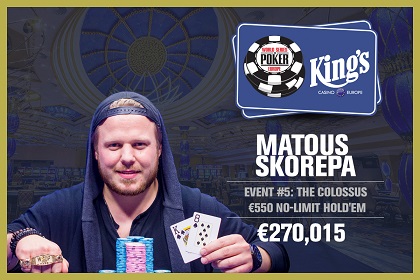 Behold! The running of the Colossus Donkament! But European-style of course!

The 2017 WSOP Europe included a modest way to win a bracelet. For only €550, punters all over Europe could take a shot at the big time. All they had to do was survive the running of the donks. And if they managed to avoid the carnage, then they could be deemed The Donkslayer and they'd be awarded a fistful of cash and the coveted gold bracelet.

The COLOSSUS Euro-donkament finally crowned its winner. After a week long of multiple starting flights and a Groundhog's Day vibe, WSOP Europe Event #5 €550 NL played down to a winner.

In all 4,115 entries took a shot at the biggest field in this year's WSOP Europe.

Ship it to the Czech Republic! Local restaurant manager Matous Skorepa secured his first bracelet and he walked away with €270,015 in cash.

Say hello to the newest donk slayer.... Matous Skorepa! He's also the newest bracelet winner. Chalk up another one for the Czech Republic.