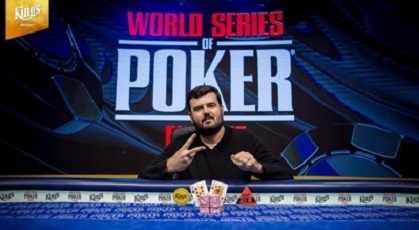 Ship it to Israel. Again. Third time so far in RozVegas. That's three bracelets for Israel in five events at the 2018 World Series of Poker hosted at the swanky King's Casino in RozVegas. Timur Margolin earned his second career bracelet after he took down the MONSTER STACK bracelet event. Fellow players from Israel, Tamir Segal and Asi Moshe also won bracelets. Segal won Event #1 a.k.a. the EuroColossus and Moshe shipped the Deepstack for his second bracelet in 2018.

Dhawal Lachhwani from India bubbled off the MONSTER STACK final table in tenth place. Mykhailo Gutyi final tabled another event. The Ukraine's Gutyi shipped Event #4 TURBO for a €61K score and he was seeking another win in RozVegas.

Mykhailo Gutyi's epic run ended in sixth place. He missed another bracelet by a few spots.

A pair of Germans made the final table, but neither would go all the way for the win. Henrik Brockmann hit the bricks in fourth place, while Sebastian Ulrich bounced in third place.

Timur Margolin edged out Chile's Raul Villarroel for the win. Villarroel earned a runner-up payout worth €83,042. Not too shabby, eh?

Timur Margolin banked €134,407 for the win in Event #5 Margolin hoisted his second-career bracelet over his head in jubilation.