Two more bracelets were awarded at the Rio on Sunday night. The Ladies Championship was won not by a pro, but by a poker dealer! Courtney Kennedy deals cards at the Motor City Casino in Detroit, Michigan. She played in the WSOP Ladies event several times in the past, yet she never cashed. Kennedy finally cashed this summer... and made the final table... then won the entire thing for her first bracelet!

Over in the One Drop, Fedor ‘CrownUpGuy' Holz beat out Dan Smith heads-up to win Event #67 $111,111 High Roller. Holz has become one of the world's biggest rising stars in a short amount of time. Holz decimated High Roller events around the world over the last year or so, but he had not played a full slate of WSOP events until this summer. It looked like Holz might post a donut for the summer, but he shipped a bracelet in the last week of action. First place in the One Drop paid out nearly $5 million.

Meanwhile, Day 1B of the Main Event attracted a decent-sized crowd of 1,733 runners. Nearly 2,500 players have entered the Main Event thus far with registration still open. 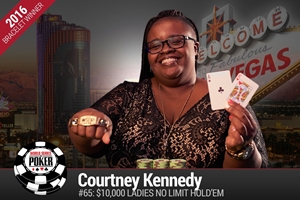 The final day of action saw nine ladies seeking the title of Ladies Champion. Wendy Freedman commenced the final table as the chip leader with a sizable stack and pro Mandy Baker was not far behind in second place. However when the dust settled, the bling was won by a poker dealer from Detroit... Courtney Kennedy.

Courtney Kennedy picked off Mandy Baker in second place and faded 818 ladies (and one dude) to win her first bracelet. First place paid out $149K to Kennedy, who had a slew of friends and family on the rail.

During the post-game interview Kennedy explained her lifetime love of the game, "I've had cards in my hand since I was two years old," Kennedy joked afterward. "I'm a home game player and I deal at Motor City Casino in Detroit. This game has been a part of my life for as long as I can remember."

The final table of the online event will be played out live at the Rio. Last summer was the first time the WSOP introduced a bracelet event. The majority of the MTT is played online until they reach a final table, which is played out in a live setting at the Rio. It's really more of a "hybrid" event, but ya know... semantics.

The final six shall play out the remainder of the tournament out in real life. First place pays $210,279 plus a bracelet...and the bracelet is real too, not a virtual one! 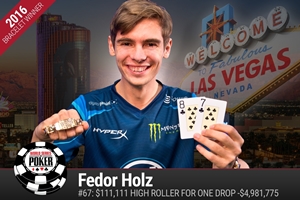 Feeding time at the Rio. The big sharks too. $5 million was being dangled over the treacherous high roller shark tank at the Rio. The usual high rolling sadists were savagely eating up each other while vying for the One Drop bracelet and a small mountain of cash. $5 million is certainly not a drop in the bucket, eh?

Only 13 players made the cut at the end of Day 2. Action went quick at the start of Day 3 and they reached a final table in the early evening. Dan Smith went into the unofficial final table with 22.4M and a comfortable lead. Fedor Holz was 4/9 and Niall Farrell was the shorty.

Holz went to work right away and amassed a stack. Once he started gobbling up chips, no one could stop the German. Holz easily marched toward victory. The win in the One Drop marked his first-career bracelet. He's been able to beat some of the best high roller players in the world, but after six brutal weeks of grinding at the Rio, he finally took down his first bracelet.

The second flight of the WSOP Main Event was underway on Sunday at the Rio. Day 1B attracted 1,733 runners, which just barely edged out last year's number. On Day 1A, only 567 players survived out of 764 runners. If my math is correct, that's a shade under 2,500 runners through the first two flights.

Russia's Andrey Zaichenko was one of the biggest stacks at the end of Day 1B and Belgium's Kenny Hallaert was not far behind.

The 2020 World Poker Tour Online Championships have finally come to a conclusion on partypoker. The pro-friendly event ended with a $100K Super High Roller. Michael Addamo and partypoker ambassador Ike Haxton agreed on a heads-up chop, but Addamo walked away as the WPT Online Championships official champion, Addamo banked early $1.3 million for being the last high roller standing.