Another Saturday night at the Rio in Las Vegas. Two more bracelets were on the line. Andrew 'Lucky Chewy' Lichtenberger only had one player standing in his way of his first title. Lucky Chewy picked off Aussie Craig Blight in second place to win Event #52 $3,000 NL. Chewy is one of the most popular players in the game and he's also considered "one of the best of the best 20-somethings from the peak of the American online poker boom in the mid-00s who had yet to win a bracelet." Ship it to Chewy.

Meanwhile, seemed like the entire Le clan was on the rail to cheer on Allan Le and his tremendous victory in Event #53 $1,500 Mixed PLO/8; Omaha 8 and Big O. Le thwarted Gavin Smith's comeback attempt. Smith finished in fourth place, while Le marched to victory.

Meanwhile, it's the Fourth of July holiday, so it's a holiday Monday in America. The Crazy Eights event should play down to a winner. Plus the 50K Poker Players Championship has hit its third day of action. Justin Bonomo is the chip leader with 42 players left in the hunt for the PPC crown. 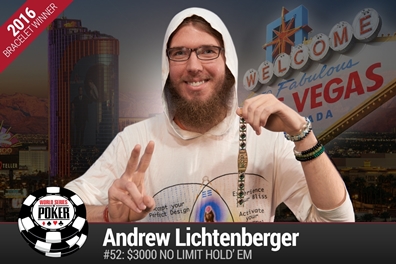 This 3K NL event needed a fourth day to determine a winner.

The final day was a heads-up bout between: Andrew 'Lucky Chewy' Lichtenberger vs. Australia's Craig Blight. Chewy held a 3-1 edge over Blight at the onset and was never really in jeopardy. The Aussie busted in second place and Lucky Chewy finally shipped his first WSOP bracelet, much to the delight of his friends on the rail.

"It feels amazing to win this," Chewy said. "I've been playing the World Series since 2009 and I've been watching it since I was a kid when I saw Chris Moneymaker win is so it feels amazing." 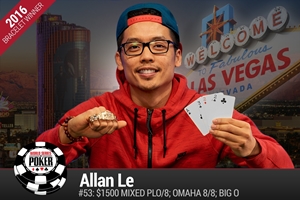 Only five players were still left standing when play was suspended at the end of Day 3. Canadian pro Gavin Smith was seeking a title and began Day 4 with the lead, but the gregarious pro busted in fourth place.

Instead, Allan Le defeated German Phiilipp Eirisch heads-up for the win. Le is one of the three Le brothers from Southern California -- and they all play poker. You might of heard of his brother Nam Le or Tommy Le, but it's Allan Le who shipped the first bracelet for the Le clan. Many of Le's friends and family from Huntington Beach, California showed up in Vegas to cheer him on to victory.

First place pays out $888,888 in this special Crazy Eight event. Huge difference between first and second place. All the money is at the top of the pyramid in this special inaugural event. Out of 6,761 initial runners, the Crazy Eights is down to the final 12 players. They intend on playing down to a winner...on the fourth of July no less.

Not quite the final table. Chase Johnson bagged up the most chips. Loni Harwood is the only bracelet winner still left in the hunt. France's Aurelien Guiglini finished the day 7th overall in chips. Bulgaria's Dimitar Danchev and Yang Zhang from China are the only other non-Americans among the final dozen.

Only 42 players still alive out of a total of 91 runners in the PPC. Only the top 12 players are paid out in this event with $1.3 million going to first place. Justin Bonomo bagged up the most chips at the end of Day 2. Todd Brunson, David Grey, Robert Mizrachi, and Bill O'Neil round out the top 5. The Grinder is sixth overall. Yeah the Mizrachi Brothers have two spots in the top six.

Some of your favorite villians are still alive including Daniel Negreanu, John Monnette, Phil Hellmuth and Howard Lederer.