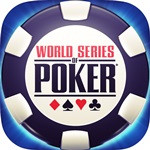 The biggest winner of the night might have been Vanessa Selbst. She didn't advance to a final table and wasn't playing for a bracelet, but she had $1.8 million on the line if Jason Mercier ships three bracelets at the 2016 WSOP. Mercier won the first one on Monday and had a shot at a second one on Wednesday. He went into the final table of Event #20 $10,000 Razz Championship with the chip lead and managed to get heads-up for the win. Alas, much to the delight of Selbst, Mercier was knocked out in second place by Ray Dehkarghani as Dehkarghani stepped into the winner's circle for his first-ever bracelet. Dehkarghani nearly won a bracelet back in 1998, but a fellow by the name of Doyle Brunson beat the young Iranian heads-up for that win. But, Dehkarghani finally redeemed himself 18 years later with a victory. Selbst will be adding Dehkarghani to her Christmas Card mailing list after picking off Mercier. Selbst can breathe a monetary sigh of relief that she dodged a gigantic bullet. Mercier still needs two more pieces of bling if he wants to ship $1.8M.

Despite all the hoopla surrounding the Razz Championship, there was also another bracelet event winding down. Event #19 $1,000 PLO was won by Florida high-stakes cash game pro Sam Soverel.

Two more bracelets are up for grabs on Thursday with the conclusion of Event #21 $3,000 NL 6-Handed. With 26 to go, Daniel Negreanu is still alive and hunting for a seventh-career bracelet. Also, Event #22 $1,500 Limit Hold'em still has 15 players remaining and Danny Le in the lead. They will also play down to a champion on Thursday. 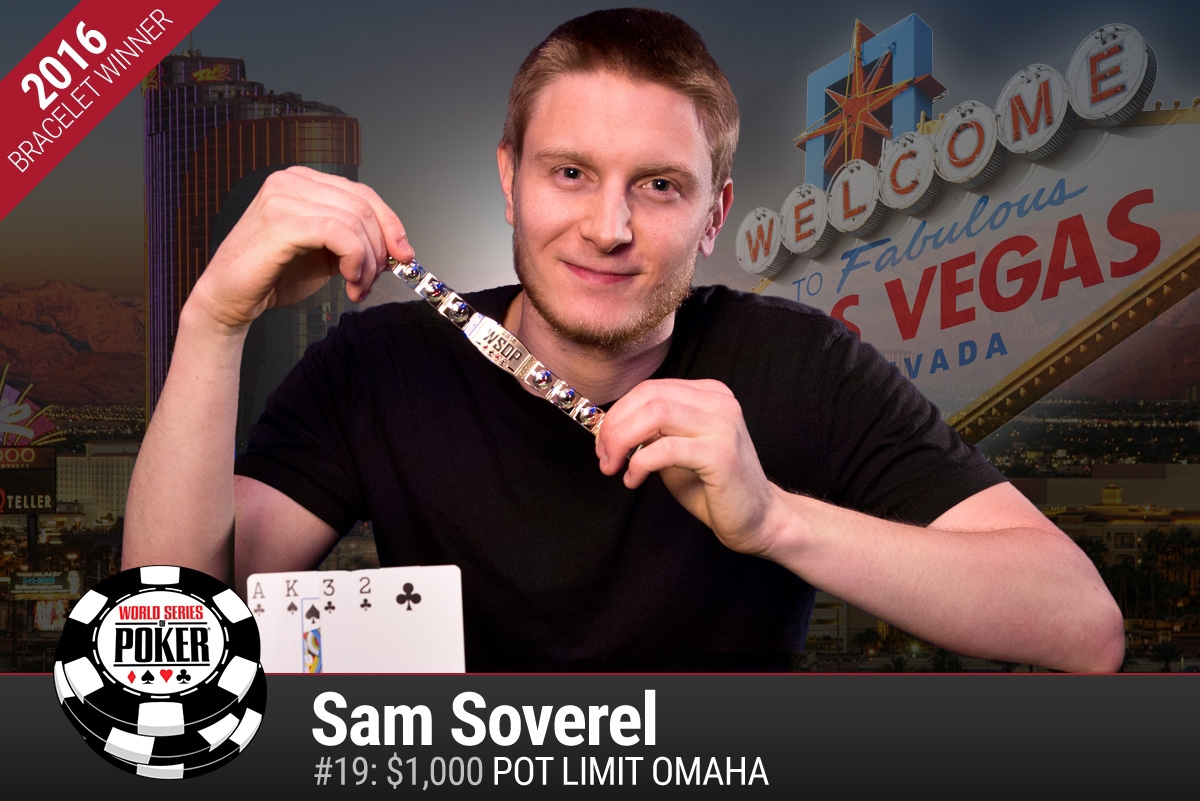 All hail Sam Soverel! The Florida pro and high-stakes cash game specialist won his first bracelet for winning a PLO-donkament. He admitted that he had been running bad all week in nosebleed cash games, so he decided to step down a level to get his head back on straight. The down shift must've worked because Soverel ended up netting a bracelet.

Dan Shak missed the final table when he busted in 11th place. Both players from Finland went out first with Leppanen out in ninth and Ojala out in eighth place. The Brazilian busted in fifth place when Bruno Borges hit the rail at the hands of Kirby Lowery. When it got down to the final two, Soverall beat Kirby Lowery heads up for the win. 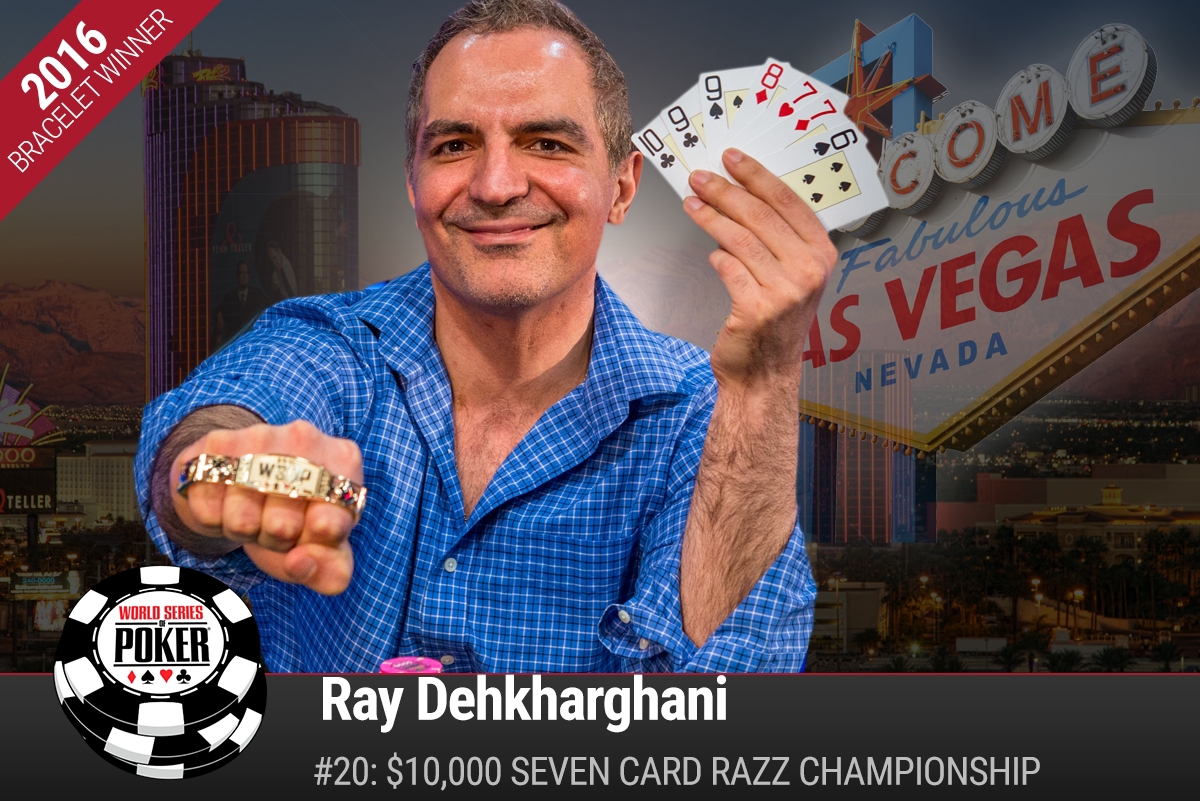 Jason Mercier went into the final table with the chip lead and the poker universe aware of his prop bet with Vanessa Selbst. Mercier is getting 180-1 odds on a $10K wager, which means he will win $1.8 million is he wins three bracelets. He won one on Monday and had a shot at a second one inside of 48 hours.

With four to go, Mercier was cruising and looked like he might coast into the winner's circle. However, he coughed up the lead to Ray Dehkharghani. After Hastings went out in fourth place, Mercier regained the lead with three to go but he'd be fighting for control for the top spot with Dehkharghani. Mercier picked off Yueqi Zhu in third place, but when heads-up began, Mercier trailed nearly 2.9M to 2M. After a heads-up battle that lasted nearly four hours, Dehkharghani finally pulled away with the win. Mercier busted in second place and came close to winning a second bracelet within 48 hours. Vanessa Selbst can unleash a momentary sigh of relief.

Dehkharghani won his first bracelet and $273K. Although born in Iran, Dehkharghani is based out of Kansas. Both of his parents were physicians and he was following in their footsteps by studying medicine at Kansas University. However, he dropped out of KU medical school to play poker full time. Dehkharghani finished in second place in a WSOP event back in 1998 and nearly won a bracelet, but he lost heads-up to Doyle Brunson. Not too many people can claim they were thwarted by Tex Dolly.

Dehkharghani thinks the $1.8M bracelet prop bet added extra pressure to Mercier, which gave Dehkharghani a slight edge. “The distraction of the side action was significant,” Dehkharghani commented in his winner's interview.

This event attracted a flock of 6-max enthusiasts, which is why the prize pool swelled to $2.8M. First place had a sick payday worth $531K.

With 30 to go, Daniel Negreanu chipped up to over 1M and moved into second overall after he knocked out Anatoly Filatov.

Day 2 ended with 26 players remaining and Martin Kozlov the chip leader. Negreanu has a decent stack and will be trying to win his seventh bracelet. Jesus Ferguson cashed in this event in 116th place.

Only the top 100 places paid out with $189K to the champ. Day 2 ended with 15 players remaining. So there's almost at a final table. Danny Le leads with 784K and Tyler Bonkowski is right behind in second place and seeking a second bracelet. Still alive: Dan Idema and Mark Gregorich.